Sync any mp3 player with iTunes

If you want to use iTunes Apple wants to make you believe that you need an iPod or iPhone. That's not the complete truth and there are numerous ways to use iTunes with other mp3 players and even mobile phones or handhelds like the PSP. Before I explain the how I would like to talk about the why; Why would someone want to use iTunes for his mp3 player. The argument that comes to my mind is the iTunes store. Another one would be that you switched from an iPod to another mp3 player and want to continue using iTunes.

The software that connects mp3 players, mobile phones and handhelds to iTunes is called iTunes Agent. Three devices are already configured in iTunes Agent. A Generic Player, Sony Ericsson Walkman Phone and the Sony PSP. New devices can be added with ease to the configuration and are recognized by defining a specific folder of that device in the configuration. For the Sony PSP that folder would be PSP for instance.

Might sound complicated but it is not. Just look at the folder structure of your device and use the information you discover. Other values that have to be added are the path of the music folder on the device, the synchronize pattern and the association with a playlist. 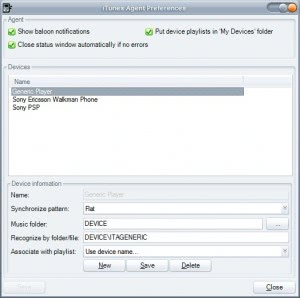 The devices can then be synchronized using the system tray. A right-click on the iTunes Agent icon opens a menu that offers synchronization.

Update: iTunes Agent has been renamed to Not Pod. The program is available on a new web page which you can access here. It is still free to download and use, and has last been updated in mid 2012 according to the website. You can download an executable or the source from the website.