Did you notice that operating systems tend to become similarly over time? It's the same in the browser war, if one browser introduces a unique feature it will be copied and added to the other browsers out there usually. Expose is a feature of Mac OS X, a window management tool also called a task switcher. The tool provides Mac OS X users with three features: Expose all windows, Expose application windows and Desktop.

Dexpose2 clones the original Mac task switcher and brings that functionality to Windows. All windows are exposed when you press the F9 key, all applications with the F10 key and the Desktop feature with the F11 key just like they are assigned on the Apple Macintosh. 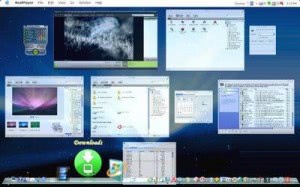 The options are extensive. Users can change hotkeys, speed and layout and configure so called hotspots as well. These hotspots are four areas at the edge of the screen that automatically provide access to the features of Dexpose2. The time that is needed to activate a feature can be configured in the options as well. If I wanted to immediately use the Desktop feature when moving the mouse to the lower right corner of the screen then I could configure this behavior here.

The memory footprint depends on the amount of open windows and applications I think. It uses roughly 32 Megabytes on my system currently with several applications like Firefox open.

The developer is making available a portable version of the program and one that needs to be installed. Note that the program has last been updated in 2008. While it should work just fine on newer versions of Windows, it is likely that the developer has abandoned the project.