Did you ever run into a Vietnamese tool for Windows? I did just a few minutes ago. I read the article about Reg Toy at the Download Squad website and made the decision to download the self extracting archive from the homepage. Unfortunately though the default language of that version is Vietnamese, at least I think it is. The second download of the zipped setup file was successful because I was able to set the language to English during setup.

Reg Toy is huge. From what I can say it's a bit complicated to navigate through the menus simply because there are so many of them. Some tabs use numbers instead of names which adds to the confusion. This is probably the Window tweaker with the most comprehensive functionality yet.

The interface is divided into three sections in the left pane that are named System, User and Others. Several links are available in each category that open lots of settings in the right pane. Most of these are tabbed as well which means that it takes some time to get a first overview of the functionality of Reg Toy. That's actually the first time that I feel overwhelmed by the options of a tweaker. 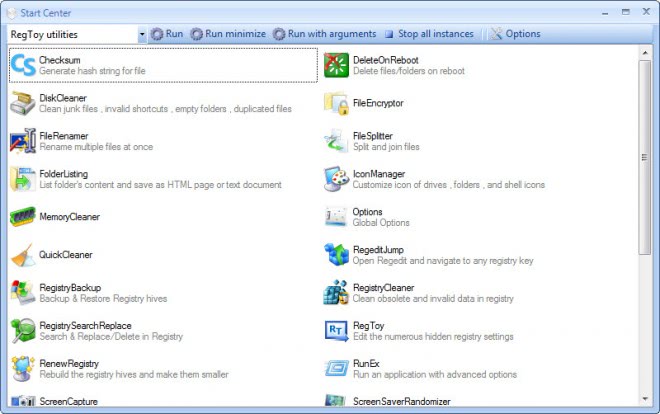 It takes some time to discover all features. What I really like so far is that Reg Toy includes the functionality of specialized programs that I have been using for a purpose so far. I can create special folders with Reg Toy for instance or edit file types comfortably. Let me know what you think of this new software.

Update: The latest version of the program uses a different interface that is displaying all program it makes available in it interface directly. You can launch any of the programs, Registry Cleaner, Backup, File Renamer or Reg Toy, the tweaker app, right from that interface.