Whatever the reason may be, Windows users should do whatever they can to protect their system. This includes installing security software to protect the system from attacks, but also to make sure that all software and the operating system itself is up to date at all times.

Update: The latest version is also compatible with newer versions of Windows, including Windows 7 and Windows 8.

It appears to use information from Microsoft's Knowledgebase exclusively and one would assume that a system that downloaded all Windows Updates recently would reveal no vulnerabilities.

When I used the program to scan my system, it did find six critical and one important security vulnerability that had not been patched, despite the fact that all available updates from Windows Update were installed on it.

I'm not sure how this can be but was glad that the application revealed the information to me. It lists the vulnerabilities and provides links to the Microsoft website that contains information about it. 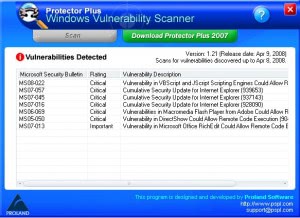 The Knowledgebase article on the Microsoft website contains a link to the download of the security patch, I did install all the patches one after the other.

An improvement would have been if the software would automatically download the patches and install them on the system, or at least those that the user selects. If you have not been to Windows Update for a while I suggest you start there and scan the system again afterwards which should fix most of the security vulnerabilities found during the first scan.

Update: The developer website does not seem to be available anymore. You can download the latest version of Windows Vulnerability Scanner from software repositories such as Freeware Files. Just download the program from there and use it normally. Keep in mind though that it is not clear at this point in time if development has stopped or is still ongoing.