If you ask an Internet user to name a Voice over IP software (VOIP) they will most likely mention Skype and fall silent after this. Skype is a well known brand, even not so tech savvy Internet users do know Skype. But have you heard of Gizmo5 or other VOIP applications ? Gizmo5 was previously known as the Gizmo Project, it provides clients for desktop PCs and mobile phones. Windows, Macintosh and Linux are supported.

The major problem of those contenders is actually to convince a group of users to use it. If I liked Gizmo5 I still had to convince my contacts to make the switch as well, otherwise it would not make much sense to use it at all unless you only wanted it to make (international) phone calls. There are basically four major functions of Gizmo5: VOIP calls, Instant Messenger, File Sharing and Video Calls.

Like in Skype Voice over IP calls are free to other Gizmo5 users and cheap when you make outbound calls. A feature that is unique to Gizmo5 when compared to Skype is the Instant Messenger support. Gizmo5 supports MSN, Jabber, AIM, Yahoo and some other networks. 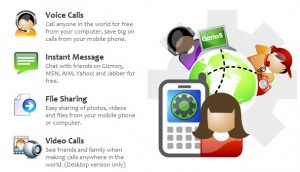 If you buy credits for making outbound calls you will be pleased that they do not expire if you are not using them in a certain period of time. An interesting note is that the memory footprint of Skype is almost double of Gizmo5's which could be a reason to switch if you use low end hardware.

Gizmo5 seems like a pretty good alternative to Skype and if you have some buddies that still use Skype try to convince them to making the switch to Gizmo5 just to test it out. They might like it as much as I do and make the switch.