The MSN Messenger seems to be highly popular in Italy because this is already the second tool, the first was MSN Repair, that I'm reviewing that is fixing MSN Messenger errors that was developed in Italy. Which leads to the conclusion that the MSN Messenger could be popular in Italy, or that the Italian version of MSN could be buggy or that Italian users are causing those bugs, hehe. Whatever it is MSN E-Fix fixes several error messages that MSN users can encounter while using the instant messenger.

MSN E-Fix can be run from any location and it actually comes in four different language versions which is surely an improvement over the other program that I reviewed some days ago which was only available in Italian. It was not hard to use though but I still prefer a program in a language that I understand to avoid errors. The supported languages are English, Italian, French and Spanish with Dutch scheduled to be included in one of the future releases.

Once started the program displays a list of error codes on the left side that can be checked and a Go button that should be pressed once all errors that should be fixed have been checked. The author send me a message where he compares his software to MSN Repair. I have no way of checking those claims because as you might know I do not use an Instant Messenger which is one reason why I will not publish them here. 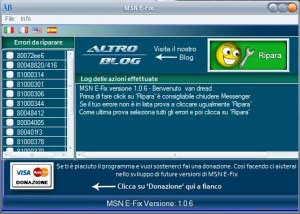 Anyone with MSN Messenger and some errors who would try them out is welcome to let me know about the results though.

Update: Microsoft recently announced that it would retire its Messenger program and integrate the program's existing functionality into the voice over IP software Skype. You can read up on the Messenger to Skype migration plan here.