I think we can all agree that the default way of removing software in Windows is probably the worst way possible. It takes ages until the Add or Remove Programs window populates the entries and removing entries is painfully slow and sometimes not working as well.

I have been using MyUninstaller until now which is faster than the default tool and comes with comfortable options like removing entries from the list of installed programs and details about the software that has been installed.

A reader mentioned Safarp recently in the comments which is another software handling the uninstallation process far better than Windows would ever do. I was pleasantly surprised about Safarps speed. It populated the list a lot faster than MyUninstaller which may be attributed to the reduced amount of information that are displayed.

By default only the name, the publisher and the estimated size are displayed while MyUninstaller displays additional information such as installation location and product version. Safarp displays version on most items if they are selected.

Both support uninstallation of programs, removal of entries in the list, quiet uninstall and program repair but that's where the similarities end - better, that is where Safarps functionality ends. 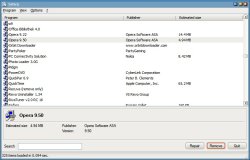 MyUninstaller has several functions that make it the better product in the end. It supports uninstalling multiple entries at once, a link to the installation folder and Registry and a search for instance.

Safarp is definitely faster and probably the better uninstaller if you open it frequently. MyUninstaller offers more information and comfort functions which make it ideal for users who need those. I will continue to use MyUninstaller because of this.

Update: Time has passed and while both program uninstallers are still available, better applications have been created in the meantime to address the issue.

They scan the file system and the Windows Registry for traces and if they find any, offer you options to remove those from the system to remove every last bit of information from the Windows system.

Since this feature is incredibly useful, I'd suggest you use either one of the programs mentioned in this update instead of the original program removers.