Rruben send me a link to an interesting software called Resizor which is an image resizing tool that makes use of the newly introduced seam carving technology to create impressive results. Instead of modifying the dimensions the same percentage throughout the image it analyzes areas that are less important and removes or adds to those with priority.

The tool itself is very easy to use with only a few options to choose from. If there is something that I have to criticize it is be that the program window cannot be resized. Only a small portion of large pictures is shown as a consequence and you have to use scrollbars to look at other parts of the image.

Resizor needs some tweaking to become a real great software but what I have seen so far is impressive enough already. It shines when it is being used to resize images with wide panoramas. It lead to some distorted images however in other cases. I tried it on an image of a person sitting in a chair with only a few pixels on the left and right and it resampled the image so that the persons head would be really big while the rest of the body much smaller in comparison. 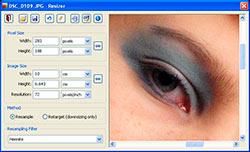 There should be a way to define areas of importance which would really mean that distortions like this would not happen anymore.

Update: The program does not seem to be available anymore. The website is not available anymore and the program itself does not seem to be hosted on any third party download portal as well. I suggest you try the Seam Carving GUI instead, a program available for download over at Google Code. It has not been updated since 2009 but it still works fine on all versions of Microsoft Windows as well as Mac OS X and Linux.

Please note that the installer will install the Visual C Runtime 2008 if it is not installed on the system already on Windows.

One of the advantages that it offers is the ability to mark areas for removal or retaining. This is excellent as it provides you with the means to select important or less important areas on a photo or image, something which Resizor did not offer.

Previous Post: « Battle of the Uninstallers: Safarp vs. MyUninstaller
Next Post: « Bring Order to your Desktop and Taskbar