Bring Order to your Desktop and Taskbar

Any window that you minimize on a Windows machine is placed in the Windows taskbar. Window can only display a limited number of open programs windows on it, and starts to group windows of the same process together to save space.

Some programs allow you to minimize them to the system tray instead which can be useful especially when you do not need to interact with the window at all. 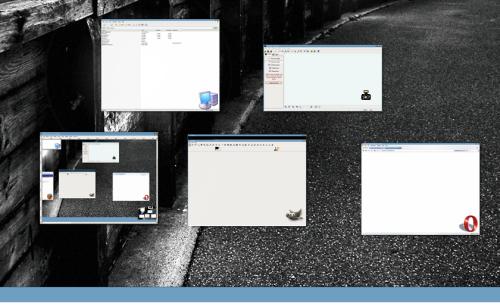 MiniMize is a software that brings order into that chaos. Instead of minimizing windows to the taskbar it displays them as thumbnails on your desktop.

These thumbnails can be moved around on the desktop, and their size can be changed in the settings.

The default value of 100 pixels is probably a bit too small. What you see in the screenshot is a width of 200 pixels instead. Raising the width increases the memory usage of Minimize a bit but not as much to make much of a difference.

Minimze uses between 5 and 6 Megabytes of RAM when it is running which is more than acceptable for a software of its kind.

The opacity of the thumbnail windows can be set as well. This is useful if you decided to pin them on top for example. The application icon is shown in the left lower corner of the thumbnail which helps identifying to which software it belongs.

I would like to point out two additional features that make this software worthwhile. First of all it supports hotkeys to show / hide thumbnails, minimize all windows and cycle the thumbnail level. Besides that it offers a list of software excluded from behaving this way.

Update: The MiniMize website is no longer available. We have uploaded the latest release version of the software program for Windows to our download server. Note that we have done so for archiving purposes only, and don't support the program in any way. You can download the application with a click on the following link: MiniMize