The popular Desktop Tower Defense game has been upgraded from version 1 to 1.5 bringing new excitement and frustration to the already excellent game. Several new enemies and towers have been included that make the game more enjoyable although I think that it did not rise in difficulty level that much.

I can only talk about the medium mode that I tried today which I passed at first try and the challenge mode to beat 100 levels which is tough as always. I was not able to beat the challenge mode though, it becomes extremely difficult at levels 75+ at least with the strategies that I have tried.

Desktop Tower Defense is an excellent game for a short period of time. It does not take long for instance to play the medium mode which consists of 50 waves of enemies that have to be hindered to reach the exits. 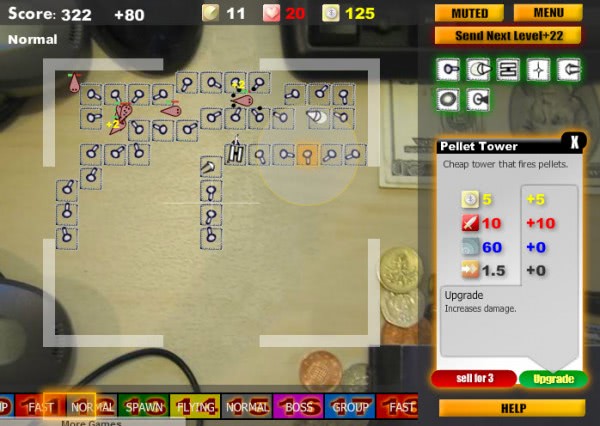 You start with a fixed number of credits, and your first task in each level is to start building a maze so that the spawning creeps need to follow it before they reach the exit. This usually means that you start with pellet towers, the cheapest tower in the game before you can build more expensive ones that have better attack power and other abilities like splash damage that you need to survive in the game.

Each tower can be upgraded multiple times which usually increases the damage, range and speed of it. Defeating creeps and starting new waves early provides you with the credits that you need to survive all the waves and beat the game. If you are new to the tower defense genre I'd suggest you start with the easy difficulty level and go from there.

Experienced players can start to play normal or hard mode instead, or challenge modes which offer a variety of challenging maps to play.

Here are a couple of tips to get you started with the game:

Previous Post: « The five most embarassing ways to die in an FPS
Next Post: « Weekend Fun Purgatorio