Par2 Files are commonly used files on today's Usenet. They are not that common on the Internet in general and I can't think of a location where I encountered them except for the Usenet. Par2 Files can be used to repair broken rar archives. That is the basic explanation of course, the technical is a little bit more complicated. Lets use a example to make it clearer. Let us assume that you have downloaded a number of rar files (.rar, r01, r02 and so on) that can be unpacked to create the file test.avi which has a size of 700 Megabytes.

Let us further assume that some of the rar files have been uploaded incompletely to the Usenet which happens from time to time. Some of the files are corrupt so that you cannot extract the rar archive fully to play the movie afterwards because of the broken files.

All you need to have is enough par2 files that can fix the missing blocks in the rar files to repair these files. The real beauty of this system is that you can fix any broken rar file with any par2 file. You do not need to look for the complete rar file, all you need is to download the par2 files which are normally posted with the rar files to the same newsgroup.

So, all you need are par files that can repair enough blocks to fix the rar archive so that it is fully repaired and can be extracted.

I'm using the free software Quickpar to test and repair rar archives that I have downloaded from the Usenet. 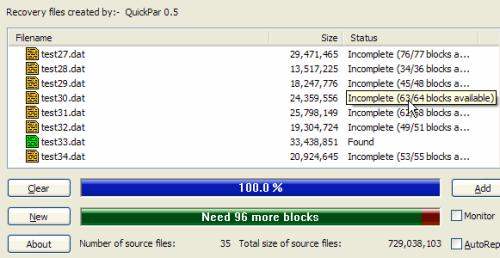 The first screenshot shows the tested files using Quickpar. It shows that 96 blocks are missing and are needed to repair the archive so that it can be extracted. After downloading enough Par2 files to match the number of broken blocks, Quickpar automatically repairs the damaged files. 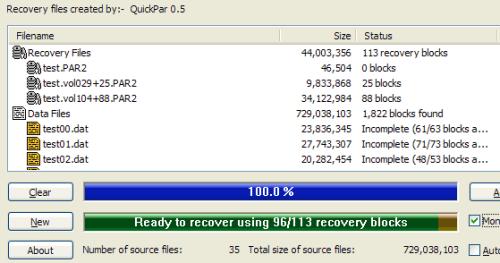 The second screenshot displays three par2 files that can be used to repair the damaged files. This process usually does not take more than a few minutes and you can extract the archive once the operation has been completed. 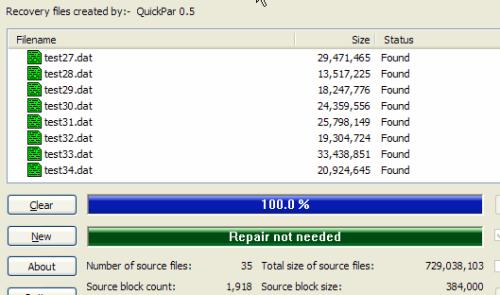 Some Usenet clients, like the excellent Newsbin Pro, support parity files natively so that you do not need another software program like Quickpar.

Two different Par versions are currently available, with a third in the making.