Windows 8 is not that bad actually

You may remember that I bought a new PC recently which I intended to use as a backup PC if my current machine would stop working. I may have gone a bit overboard with the specs though and decided to make it my gaming rig in the meantime. When the Windows 8 Release Preview was released by Microsoft I upgraded Windows 7 Professional which was running on that PC to that preview version of Windows 8 to play around with it for a while.

While I worked with previous versions of Windows 8 before, I always did so on a mobile device, a laptop for instance, and I did not really like the experience. On the desktop though, I have to admit that I'm beginning to like it. I'm not saying that everything is golden and that this is the best operating system that Microsoft ever produced. I'd like to address some of the issues that I personally had previously with Windows 8, and how my perception changed with use.

The biggest issue that I had was with Metro, and the switching between interfaces. One example: when I want to search for a file, I need to switch to Metro to do so. When you look close, you will notice that the number of keys you press is the same. You hit the Windows key to bring up Metro in Windows 8, and you also hit the Windows key to pop up the start menu in Windows 7 and previous editions of Windows. You then type in your search term, wait for the results to popular, and select one with the mouse or keyboard. 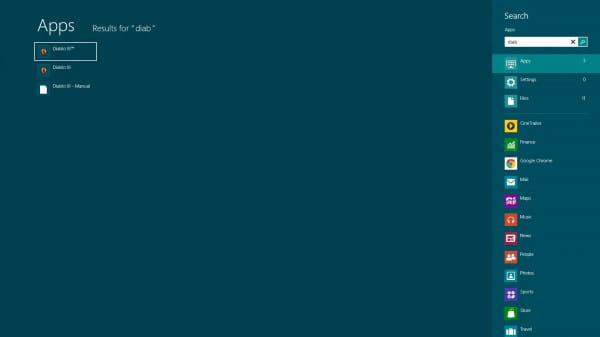 The only difference is the switching of screens in Windows 8, which at first is highly irritating. You do get used to that however, and while I personally would have preferred a desktop based search like that, I personally can live with the search functionality and think that it is actually more versatile than that in previous versions of Windows.

I tend to ignore Metro mostly though as it is not really offering anything that I really need besides some quick links to applications that I'd like to launch. Some users on the other hand may like the startscreen, and its display of dynamic information. Other apps that users may like include the mapping app to quickly get directions or traffic information based on the PC's location or another spot that you select. Yes, you can get the same information on the Internet, but Metro provides them to you after you click once.

You can add weather information and news, and see them change in their tiles in realtime. For me though, it is nothing more than an application launcher at this point in time.

I personally think that regular users will like the Metro interface because of its simplicity and the information it makes available to them directly. Tech-savvy users will probably largely ignore Metro though, and while you can't do that 100%, you can largely ignore the new interface.

What I do not like at all is the fullscreen-only approach, especially on large computer monitors. While you can display a second app in a sidebar, you are still highly limited in this regard. I also dislike the fact that you can't close applications directly that you have open in Metro.

The desktop of the Windows 8 operating system has no start menu button anymore, and the functionality that Microsoft added in-place is lacking. I first thought that this was a glaring mistake on Microsoft's part, but after using the operating system for a while I can say that I do not really miss the start menu.

For applications, I either have added them to the taskbar (which I also did under Windows 7 with my most-used apps), or I tap on the Windows key to enter the first characters in the search to load them this way.

I only use the start menu on Windows 7 for two other purposes: first to launch the control panel, and second to shut down the computer. I have to admit that I personally dislike the way Microsoft has resolved those two. I have to move the mouse to the upper or lower right corner of the screen to display the charms bar to access the features from there.

If I want to shutdown or restart, I have to move the mouse to the location, click on Settings, then Power, and then finally Sleep, Shutdown or Restart.

For the Control Panel, I have to be on the desktop to begin with, as Metro is only displaying a crippled Control Panel if you open it in the Metro interface. The real control panel is however linked directly once you hit the settings button. I can live with that.

Windows 8 is fast, which I did notice first on system start. It boots a lot faster than my Windows 7 machine, despite both being powered by a fast Solid State Drive and Windows 8 not optimizedÂ  at all. The switching between the desktop and Metro is also very fluent, and while it really depends on the PC Windows 8 is installed on, I'd estimate that it is on average faster than the same PC running Windows 7.

Feature-wise, there is lots to explore. You got new interfaces for some core programs like Windows Explorer or the Task Manager, a better file copying and moving dialog, syncing of data if you want, a refresh and reset option, and other features that are mostly good additions or improvements over previous versions of Windows.

If I would have a choice, I would have preferred that Microsoft would have released an update to Windows 7, with the better search menu, better performance, and with Metro functionality planted directly on the desktop.Â  As it turns out, Windows 8 is still a radical shift away from the conventional PC desktop, which also means that users upgrading their PCs to the operating system, or buying a new PC with it, will have to spend time adopting. It is probably the tech-savvy users who need to spend more time, while regular users will spend more time using Metro.

All in all though I can say that Windows 8 is not as bad as some reviewers have tried to make it look like. Yes, you need some time to get used to it, but once you do, you will appreciate several of the features that Microsoft has implemented into the operating system.