With two Solid State Drives and only one platter-based drive in my main PC, defragmentation has become more of a non-issue lately. While I still have to take care of the standard hard drive, I can ignore the SSDs in this regard as they do not need to be defragmented at all.

While there is certainly nothing wrong with using Windows' own disk defragmenter for the job, I personally prefer to use third party programs like Defraggler instead which are better suited for this due to their edge in performance and functionality.

Defraggler 2.10, which has been released last month, is one of the most popular third party disk defragmentation programs.Â  When you look at the program's release notes, you will notice that Piriform, the company developing the program, has managed to improve the defragmentation speed by up to 30%. The developers furthermore have optimized the program's free space algorithm to optimize the process further. 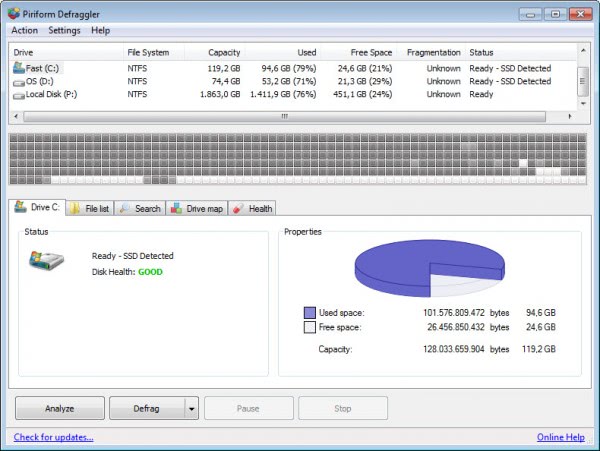 The full release history is as following:

The update before that improved the program's SSD detection, and added a warning message when users tried to defragment a Solid State Drive.

It is obviously quite difficulty to benchmark the speed improvements that the developers claim the new version of Defraggler ships with. For that, one would have to create a disk image, and compare defragmentation using the old and new version of the program. Since this would be well beyond the scope of this article, I'd like to look at a few of the often overlooked features of the application.

A pretty cool feature is the ability to defrag files that you select. Defraggler by default displays a list of the most fragmented files on the system in the File List tab. Instead of defragmenting the whole drive, which could take hours to complete, you could select to optimize the most fragmented files instead. For that, just check the files that you want to defrag to speed up the process.

Disk defragmentation is becoming less of an issue with the rise of Solid State Drives. Defraggler regardless of that is an excellent program for the job.

Are you defragmenting your disks regularly? If so, which program do you use for the task?

Previous Post: « Windows 8 is not that bad actually
Next Post: « Block popular Software Updates on your PC