Two of the three hard drives in my main computer are Solid State Drives (SSD) that do not need defragmenting. In fact, running defragmenting software on them could have an opposite effect on the drive's speed and health.

The popular defragmentation software Defraggler has recently been updated by its parent company Piriform. The software, while not blocking Solid State Drives outright, is now warning users if they select a SSD for defragmentation.

When you first start the defragmentation software you see a list of all connected drives and various stats collected by the software. Stats include each drive's overall capacity, used and free space, fragmentation and a status field which indicates if the drive is ready for defragmentation and whether it is a SSD or not.

You can still select a SSD for defragmentation but the program will display the warning message on the screenshot above if you do so. 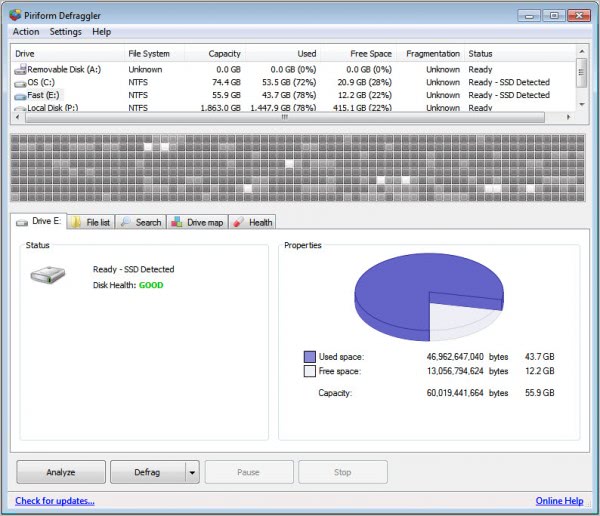 But that's not the only new feature of the latest Defraggler version. The developers have added disk and file benchmarking capabilities. For the benchmarking options to become available, you first need to analyze a disk or partition. This analysis displays the fragmentation of the partition or drive, plus it displays a button to benchmark that drive. A click on the button runs a disk performance check on the drive that calculates the drive's random read speed.

It is furthermore possible to benchmark individual files by switching to the file list tab, right-clicking one of the files and selecting to benchmark it from the context menu.

The changelog lists the following additions, fixes and changes to Defraggler 2.08:

Better SSD detection is a great addition to Defraggler. Windows users can download the latest version of Defraggler from the developer website. (via)