If you have liked the Desktop Christmas Tree you will love Snow Desktop as it is the perfect companion for the Christmas Tree. Snow Desktop will make it snow on the desktop once it is executed. Not the usual kind of snow though that is falling from top to bottom in an overlay without interacting with anything that is currently displayed on the computer screen.

This Desktop Snow application interacts with everything. If you have your browser window open you will soon notice that the snow is covering all of the icons and bars on the top slowly making its way to the bottom. It can happen that that all menus are covered in snow which looks really interesting.

Moving the mouse over an area will remove the snow there so that the menus can be accessed again. The snow on the other hand will continue to fall just like in winter. 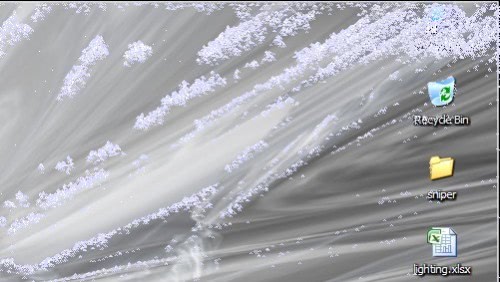 The tiny portable application is using no more than 1.5 Megabytes of computer memory while running. Just click the link below to Desktop Snow right away.

Update: The program is no longer compatible with recent versions of the Windows operating system. While it is possible to load the program, it won't cover the desktop and its icons in snow on these newer systems.

If you can't do without snow, I suggest you try the Desktop Snow OK software instead, which is a portable "let it snow on the desktop" type of application compatible with all recent versions of the Windows operating system.

It comes with a configuration menu that enables you to change the appearance of the snow flakes on the screen, or change it from flakes to other items such as stars or flowers, change the intensity of the snow fall or the direction the snow is coming from. All in all a great application if you like to add snow effects to your desktop.