There Are No Active Mixer Devices Available

The error message "There Are No Active Mixer Devices Available" appeared after clicking on the Volume icon in the Windows System Tray the other day.

Audio worked fine before shutting the computer down yesterday and clicking on the icon was one of the first actions of the new day.

MP3 playback was still working but games would not launch anymore stating that no audio devices could be found. A check of the sound hardware in the Control Panel was positive as audio devices were listed there and reported as working properly.

The easiest way to check that is to use Windows-Pause to open the System Control Panel. There you find a link to the Device Manager which you can use to check hardware connected to the computer.

The next troubleshooting step was to check whether the Windows Audio service was up and running. This is done by using Windows-R to bring up the run box, typing services.msc and hitting enter.

You may need to confirm the UAC message before the Services manager appears.

The Windows Audio service was set to automatic but was not started. That was strange but was solved easily by right-clicking the entry and selecting the [Start] entry from the context menu. 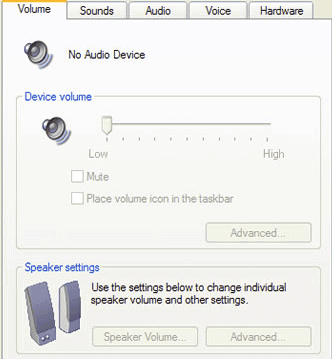 When I opened the Sound properties they stated that "no audio device" was available on the system as you can see on the screenshot above.

The message "There Are No Active Mixer Devices Available" disappeared after starting the Windows Audio service.

Update: Some Windows users have noted that the workaround or fix described above did not work when they tried to resolve the "there are no active mixer devices available" error message.

Another option to troubleshoot the issue is to go into the Device Manager (Start->Control panel -> system -> Hardware -> Device Manager ) and see if one or several of the PC's audio devices have exclamation marks next to them. If that is the cause you could visit the manufacturer's website and download the latest sound driver for the device. Install the new sound driver and restart the computer afterwards to see if it resolves the no active mixer error message.

Check out the comments below for additional tips on resolving the issue.