Disk images come in various formats like the popular ISO format but also img, bin, mdf, cdi, nrg or b51. The formats are created by various applications and one hardly comes upon a burning software that can burn all of the formats.

Converting the formats into a supported format is probably the best solution if you encounter an unsupported disk image format. Any To ISO Converter can turn all of the disk formats mentioned in the first paragraph into the ISO format which is supported by most burning software programs.

The ISO converter has been designed with simplicity in mind. You only need to browse for and add one of the supported disk formats which you want to turn into ISO format. A click on the Convert button will start the conversion which does not take longer than a few minutes the most depending on the size of the disk image. 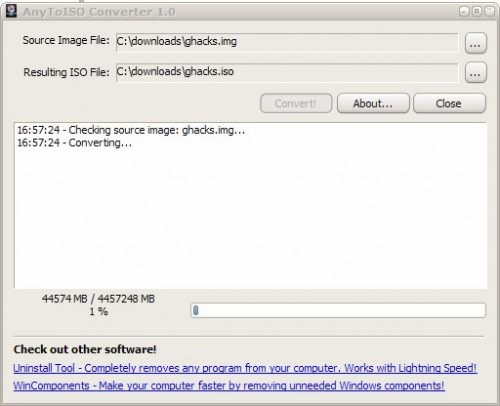 Any To ISO Converter has a download size of only 157 Kilobytes which is also the size on the computer's hard drive. The application is completely portable and especially useful for computer users who have to deal with several image formats from time to time which are not always supported by the burning software.

Update: The developers have now create a commercial version of the program, and are continuing to offer a lite version as well. The Lite version is limited to CDs only, which makes it not the best tool available for users who like to convert larger than CD-sized image formats as well. You could try specialized free tools like Img to ISO, ISO Workshop or MDF to ISO instead, or a burning software like ImgBurn which can handle the majority of those formats easily.

Winamp 5.9 RC1 has been released