WhatsApp has been adding many useful features to its instant messaging app. The beta version has been updated to allow users to send messages to themselves.

WhatsApp now lets you message yourself

Sending messages to yourself isn't a new thing, many people having been doing this for years through email services. Telegram and Slack have had this feature for a long time, so WhatsApp is quite late to the party. But it's better late than never.

To access the new feature, install the latest version of WhatsApp beta on your phone. Tap the new chat button in the bottom right corner of the app's main screen. You will see that your own account listed at the top of the contacts list, while the rest of the contacts are listed in alphabetical order. Tap your account's name in the list, and you will be able to send messages, images, videos and files to yourself. And if you want to save a link for reading later, you can tap the share button in your browser, select WhatsApp and send it to yourself.  It is also a neat way to test emojis, GIFs, and stickers before sending them to your friends and family.

The message yourself option is not usable via the WhatsApp program on Windows desktops. If the chat has been created via the option on your phone, you will see that it is listed in the PC app, but the conversation is not clickable, so you can't access any messages in it on your computer. 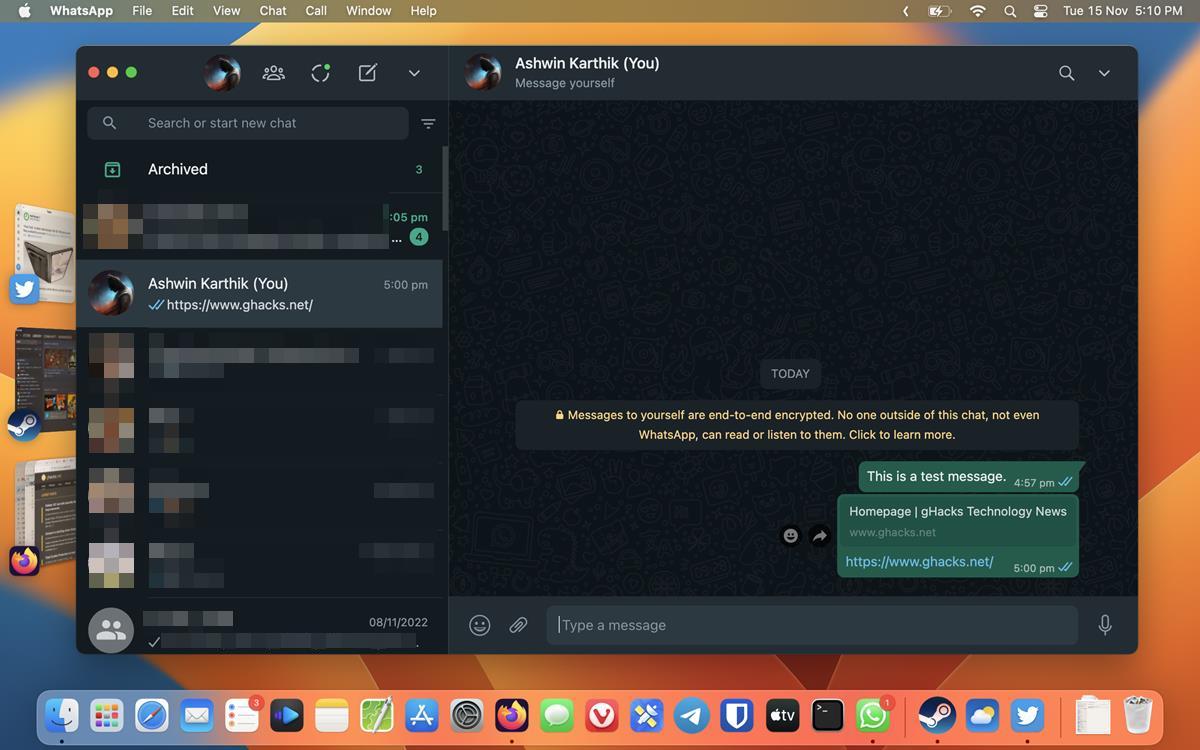 Here is the weird thing, I can access the personal chat on my Mac, and also through WhatsApp Web in any browser (PC and Mac). I'm not why it is blocked in the Windows app, considering that it's just another chat. 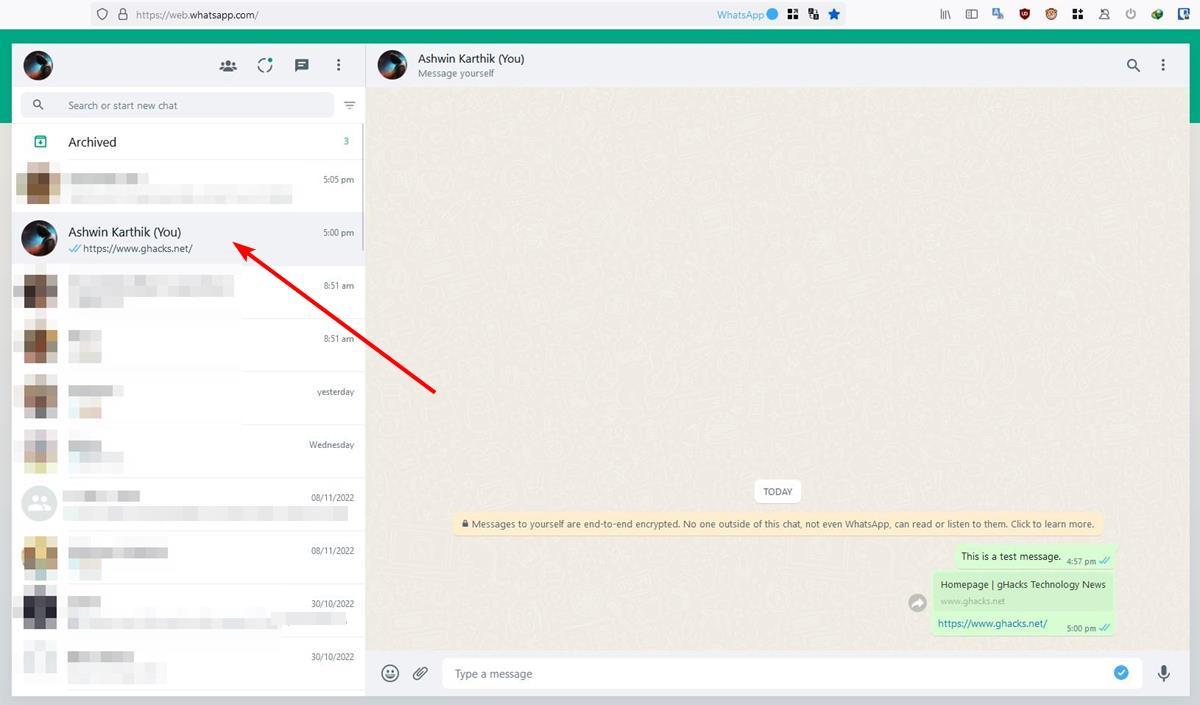 WhatsApp is rolling out a way to allow you to connect additional devices to your WhatsApp account. The feature, which is called Companion mode, first spotted by WABetaInfo (via AndroidPolice), makes it possible for WhatsApp users to link their Android tablet to their account. This option could be particularly useful on tablets that don't have a SIM card, as you can use the same account on your mobile phone. The reports say that users will not require the phone to be online, in order to use the app on the tablet, i.e. it syncs the chats via the cloud instead of depending on device-to-device synchronization. 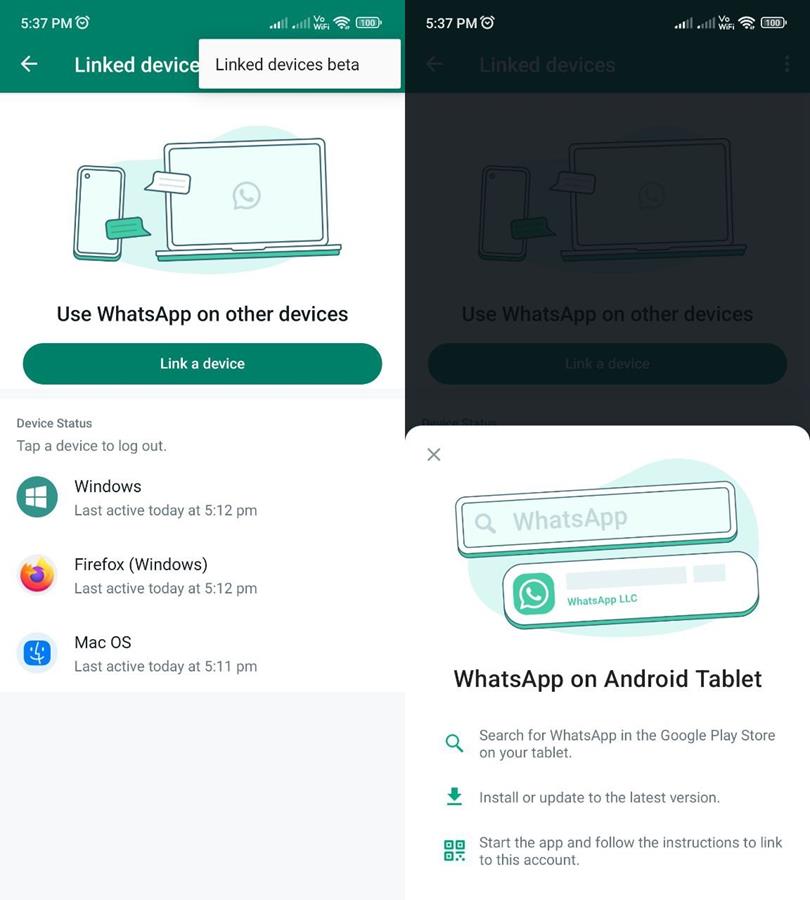 I can see the new option on my phone, but I don't have an Android tablet to test it with. But, here's how you can try it if you have a tablet. Open the latest beta version of WhatsApp on your phone, and access its menu. Tap on the Linked Devices option, and from this screen, tap the menu again. You should see an option called Linked Devices Beta. It will ask you to install WhatsApp from the Google Play Store on your Android tablet, open it, and follow the instructions given on the screen.

In case you missed it, WhatsApp recently introduced Call Links that lets you invite up to 32 people to audio calls and video calls. The Meta-owned service also began rolling out WhatsApp Communities, which is a way for several groups to come together as a single large group to discuss things.

Article Name
WhatsApp now lets you message yourself, and adds a way to link Android tablets
Description
WhatsApp Messenger has an option that lets you send messages to yourself. We show you how to use the new feature.
Author
Ashwin
Publisher
Ghacks Technology News
Logo
Advertisement

Previous Post: « Telegram update brings Topics in Groups, improved night mode on iOS and more
Next Post: « Microsoft's SwiftKey is back on the iOS App Store