WhyNotWin11 is a third-party program that enables you to find out if your Windows device is compatible with Microsoft's Windows 11 operating system. The latest version includes updated processor lists that ready it for Windows 10 version 22H2.

While PC Health Check is available again, it is not the best tool when it comes to compatibility checks.

Tip: you may check a Registry key to find out if your Windows PC is compatible with Windows 11 version 22H2.

WhyNotWin11 is an open source program that checks all system requirements of Windows 11 to return whether the device is compatible with the operating system.

Usage could not be simpler: download the program from the project's GitHub website and run it. The program runs the checks and returns its findings to you in a matter of seconds. The new version does not display a warning anymore if run on Windows 11, as users may want to check if their device is compatible with the next feature update.

While that should be a given, as Microsoft has not announced any changes to the system requirements, some may want to run tests anyway. Doing so may also be interesting to users who bypassed system requirement checks initially, but replaced some hardware in the meantime. 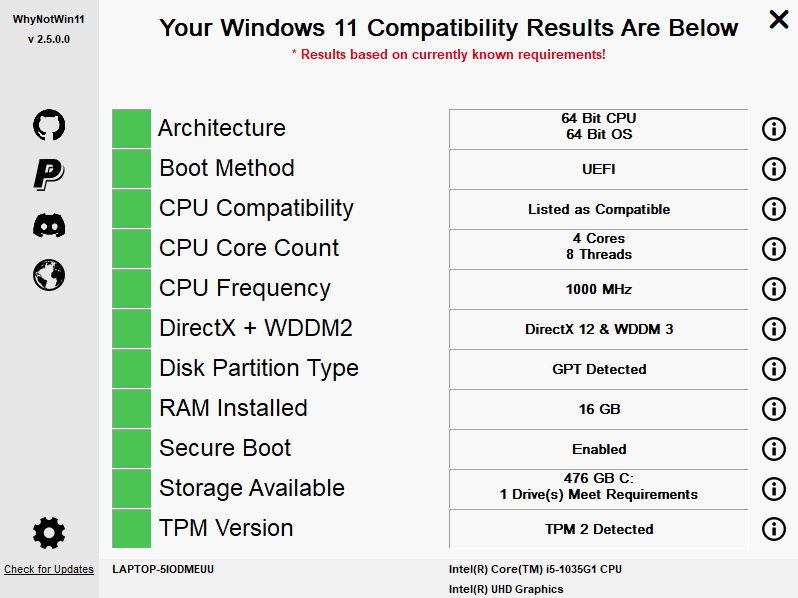 The device is compatible if all checks are passed; this is indicated by the color green. While it is possible to bypass some system requirement checks during installation of Windows 11, doing so may lead to issues later on, including the blocking of future updates.

Note: Windows may throw a SmartScreen error when you run the application; this does not mean that the program is malicious, only that it is new and unknown to SmartScreen.

Hover over the "i"-icon in the interface next to a test to find out more about it. You find a couple of useful resource links in the Settings, e.g., on enabling TPM or Secure Boot, as these may be disabled by default on some devices.

WhyNotWin11 is a useful tool, especially for users who run older versions of Windows, as it provides direct compatibility information.

Now You: are your devices compatible with Windows 11? (via Deskmodder)