Users in the Developer Channel can now update to Windows 11 Insider Preview Build 25151. This version is another bug fix release, which is not surprising as Microsoft appears to be focusing its efforts on the 22H2 feature update that is said to debut this fall.

The latest version of the preview build fixes a crash due that was caused by the Windows Security app. The Exclusions page in the Security app will no longer truncate the space for the file paths. Deleting ports using printui /s should no longer make the computer crash. A bug that was introduced in the previous 2 builds was preventing Print in UWP apps from working, this issue has been patched.

The context menu should be dismissed properly, when you right-click on a tab, and then click somewhere else in File Explorer. The release notes for the build say that a scaling issue that could result in File Explorer Tabs being unexpectedly large has been resolved.

The previous build, Windows 11 25145, fixed an issue that was making PCs reboot when the Shut Down option in the Start Menu was clicked. This issue has been removed from the list of known issues.

The known issues related to Widgets, Live Captions, Easy Cheat, Mica material and Acrylic blur effect, that we reported about in recent builds still haven't been fixed in the latest build.

There is one new issue that has made the list in Build 25151. Some people who upgraded to the previous build may experience a green screen issue caused by the KMODE_EXCEPTION_NOT_HANDLED bugcheck. Users have reported that they are running into the error, and it seems to be caused by NetAdapterCx.sys when using an Ethernet connection. This error does not occur when a Wi-Fi network is used. Even though the company has acknowledged the problem, a Microsoft representative said that a fix for this issue may not be available in the next flight.

Refer to the official announcement for more details about the changes in Windows 11 Insider Preview Build 25151.

File Explorer tabs are still not available for all users, despite the feature rolling out to some users in the Beta Channel. If you can't wait to try it, you can use ViVeTool to enable tabs and the new navigation pane manually. Speaking of which, a new version of ViVeTool was released a few days ago, with improved boot persistence (refer to the /store command in the example below). It changes the command syntax completely, the addconfig and delconfig commands have been replaced with /enable and /disable.

e.g. The command to enable File Explorer Tabs in the old version was vivetool addconfig 37634385 2.

The new syntax is as follows.

The first one is for enabling tabs, while the 2nd option enables the new navigation pane. 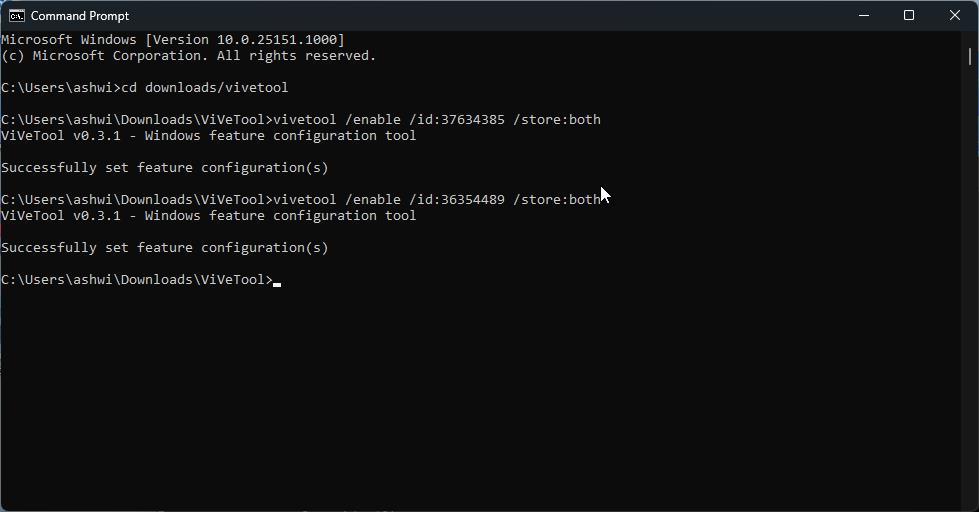 Don't like the feature? Just replace the word enable with disable in the commands to turn it off. You can use the /query command to view the full list of features that you can enable using the tool.

Note: Windows Terminal and Powershell users should add a .\ before the command.