Microsoft released Windows 11 build 25151 this week. The development build includes some features that may be integrated in the 2023 feature update for Windows 11.

One of the changes in the new version affects the operating system's open with dialog. The prompt is displayed when users select it from the right-click context menu. It gives you options to launch a file with a different application, e.g., an image in an image editor instead of a viewer.

The current version of Windows 11 lists several applications when open with is selected from the right-click context menu. The option to "choose another app" displays the open with prompt with additional applications and an option to pick another program from the local system. 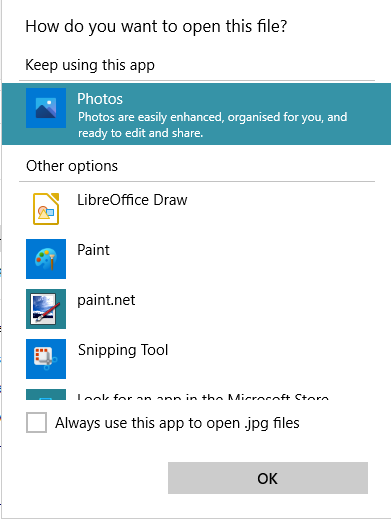 The new dialog changes things around. It has a new style that supports dark and light modes, but the there are several key differences to the current dialog. The "other options" listing of the current dialog, which lists all available apps that Windows 11 picked for the file extension, is split into a "suggested apps" and a "more options" section.

It is unclear how apps are selected for inclusion in either of the sections. It is possible that use may play a role, but Microsoft may also use it to promote (some of its) apps or system defaults over third-party apps.

Two options are listed at the bottom of the interface. The first opens the Microsoft Store and apps capable of opening the file type. The second gives you the option to pick an executable from the local system. Options to switch the default application for the file type or to use the selected application once to open it are provided.

The new feature is not available universally yet, but only on select machines. You may enable it with the help of Vivetool. Just run ./vivetool /enable /id:36302090 from a PowerShell prompt to enable it. (thanks Deskmodder)

The redesigned open with dialog is a step in the right direction. Besides adjusting the style for dark and light modes, it is giving users more options, including one to make a new app the default application using it.

Now You: what is your take on the new open with dialog?