The developer of the KeePass password manager has released version 2.46 of the application on September 10, 2020. KeePass includes a built-in update checker but downloads and installations of new version still happens manually. 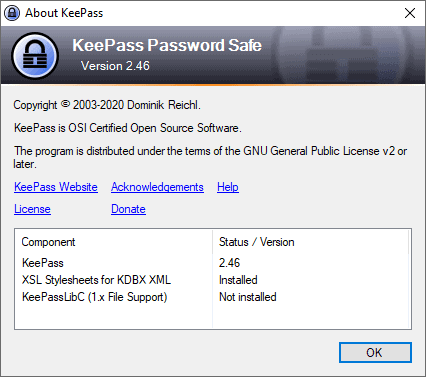 KeePass 2.46 includes new features, improvements, and bug fixes. One of the main new features of the release is support for TLS 1.3 which improves the security and performance of certain connections made from the client.

The feature requires that the Microsoft .NET Framework 4.8 or higher is installed. KeePass users may set up the client to load a password database from a URL (and save it to that URL), and if that is set up, TLS 1.3 may be used. The password manager supports FTP, HTTP, and WebDAV protocols by default, and users may extend the functionality by installing the IOProtocolExt add-on which adds support for SCP, SFTP, and FTPS protocols.

Another new security feature is the ability to block certain screenshot applications from capturing screenshots of the KeePass interface. You need to edit the KeePass.config.xml file directly to enable the feature as it is not available in the program's preferences.

A right-click on a column header in the password manager's main interface and the selection of configure columns opens the preferences window of the same name; use it to add or hide data columns, e.g. creation time or URL or in the main interface.

KeePass 2.46 includes a number of improvements to existing functionality. The quality of icons has improved in the entry "URLs" menu and "Override URL" field, the user interface of the generic CSV importer has been improved, and large texts that may contain invalid characters are now truncated to ensure a "responsive user interface". A "show more" link is added to expand these in the client at any time.

Interested users can check out the entire release notes here.