Customize Do Not Disturb Schedules on Android 10

by Martin Brinkmann on September 04, 2019 in Google Android - 7 comments

The new Android 10 is available already for select devices; my Google Pixel 3a received the update some hours ago and it went through without issues. One of the features that Google improved in Android 10 is Do Not Disturb.

I have configured my Android devices to receive call and message notifications from select Android contacts only to reduce noise. The option remains but Android 10 introduces preferences to customize Do Not Disturb behavior even further by enabling customizations for individual schedules.

Long-tap on the Do Not Disturb toggle to open the Settings on Android 10. The main page lists options to configure Do Not Disturb; you may set up rules for calls and messages, and allow or disallow certain events and actions such as the playing of media sounds from firing in that mode.

A tap on schedules displays custom presets, e.g. Sleeping or Event. You can create your own schedules with a tap on the option or configure the existing ones instead. 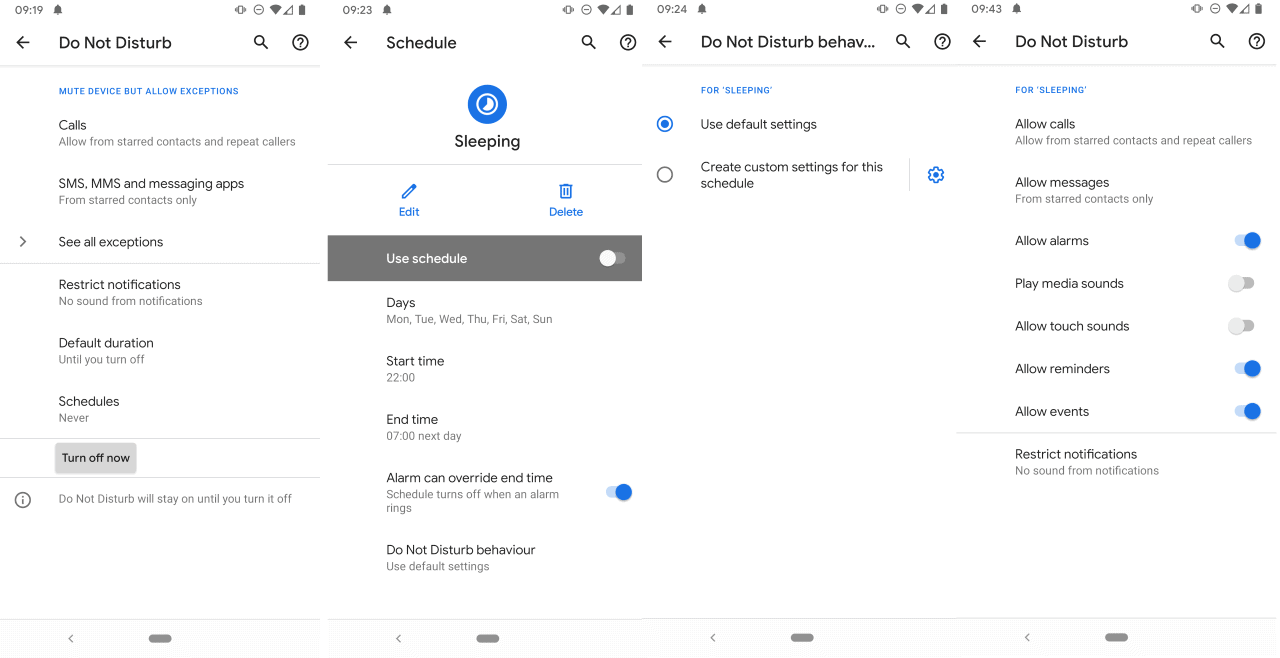 While you may prefer that some settings are shared across both Do Not Disturb schedules, you may want to use custom settings for others. You could switch the allow calls option from starred or none at all to contacts to make sure you get your boss' calls, or enable alarms, reminders, and events in the Work rules.

Each schedule uses the default Do Not Disturb behavior by default. The new Android 10 features allows you to change the defaults. In other words: schedules no longer share the behavior but may differ from one another in certain aspects.

You may override the following Do Not Disturb settings:

How many Android users are aware of the fact that Do Not Disturb supports schedules? The new customization options may be useful to power users and users who need different notification settings for different times of the day, week, or other time periods.

The feature is easy to set up and since you may create as many schedules as you like, should provide users with more options in that regard.

Now you: Do you use Do Not Disturb?