ShanaEncoder is a versatile video and audio converter

ShanaEncoder is a free program for Microsoft Windows devices to convert and process video and audio files effectively.

The program supports Windows XP and newer versions of Microsoft's operating system including Windows 10. It uses FFmpeg which means that it can read and convert all popular media formats as well as lesser used formats.

The program needs to be installed on the Windows system before it can be used. Note that it requires an Internet connection despite its 50 Megabyte size. The installation itself is clean and does not install any unneeded third-party components on the device. 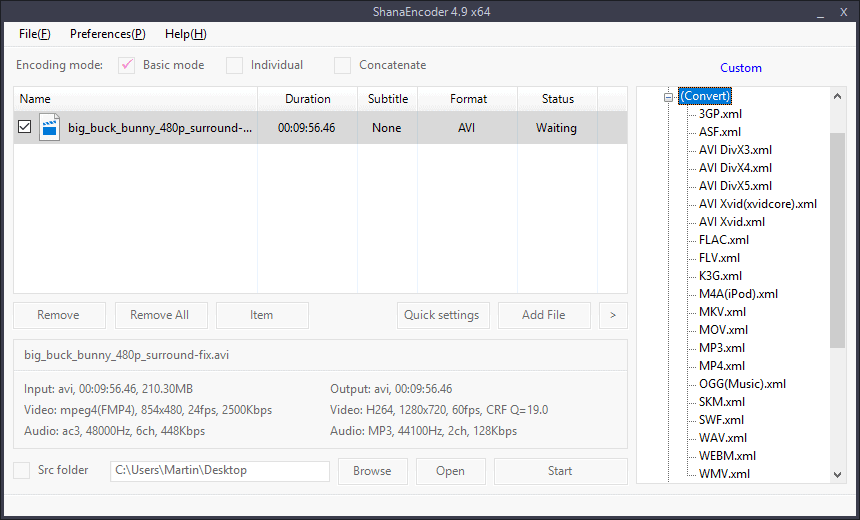 ShanaEncoder's interface is functional. You may drag and drop media files on the program window to add them to the queue or use the File menu to load them this way. The application parses each file and displays vital information about it in the interface. The name, duration, format, and subtitle availability is displayed for video formats.

A double-click on a file plays it right away using the built-in player; an external program is not needed for that.

ShanaEncoder supports presets for various devices and formats that you may select from the right sidebar. Presets include formats supported by Apple, Sony, LG, or Samsung devices; (generic) Android is not listed under presets, nor are brands like Google, Nokia, or most of the Chinese companies like Xiaomi.

The media converter supports generic convert presets and a custom option that gives users full control over the conversion process. The latter may be useful if the target device or format is not listed under presets. 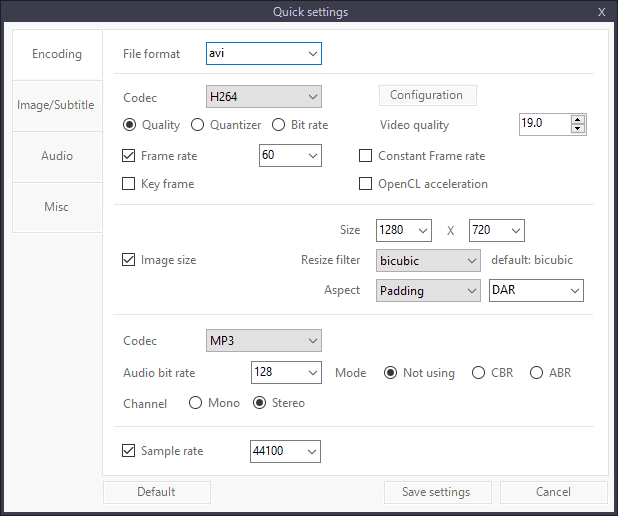 Selecting a preset loads and displays its configuration in the interface. You find the information in the lower half under Output. Select "Quick settings" to change some of these parameters, e.g. the audio or video codec, frame rate, size, or subtitle parameters.

Tip: right-click on any media file and select preview to load a preview using the selected output settings; ideal for testing output settings before hitting the start button to being the conversion process.

The target folder for conversions is the desktop folder but you may change the path in the interface. A click on start begins the conversion process. ShanaEncoder displays the progress of the conversion process in the same interface window. The processing time depends on a number of factors including the selected output format and parameters, and the PC's hardware; it was fairly quick during tests but mileage may vary depending on these factors.

The application starts in basic mode by default. You may change the encoding mode to individual or concatenate in the interface. Individual unlocks the option to set different presets and output formats for media files. Concatenate merges the media files instead.

ShanaEncoder supports lots of extra options. Advanced users may change ffmpeg parameters directly in the interface or make changes to the filtering settings. An option to save custom presets is provided which is useful if you plan to use the media convert regularly for a specific format or configuration.

Other options include setting segments or cropping media files, selecting one of the available hardware accelerated encoding options, or changing the process priority.

ShanaEncoder is a versatile very powerful media converter and encoder for Windows. The program comes with a set of presets for conversions and different device types that simplify things further if the desired format or device type is available as a preset.

The selection of presets appears a bit dated in some regards as certain device manufacturers are not even available. New presets can be created and saved easily. While that requires some research to determine the best output format for a certain device type, it is a one-time process thanks to the option to create new presets.

One downside of the program is that it does not include a help file and that the linked help resource is almost entirely in Korean. It is also unclear why it needs to download additional components during installation and requires Internet connectivity on Start of the program as well.

Now You: Which media converter / encoder do you use, and why?

Previous Post: « How to make sure that AIMP remembers the last playback position
Next Post: Subtitle Edit is an open source subtitle editor and converter which supports 200+ formats »