How to make sure that AIMP remembers the last playback position - gHacks Tech News
ghacks.net

How to make sure that AIMP remembers the last playback position

The media player AIMP is my favorite application for music and audio playback on Windows. It is an incredible application with a rich feature set and all the features that I could possibly want in an audio player.

Some of my favorite features include Internet Radio playback and recording, theme and plugin support, support for retrieving data from the Internet (optional), playback support, and a lot more.

Lately, I have started to use AIMP as a player for audiobooks. Audiobooks that come in a single file have a playtime of several hours and it is often the case that I pause playback to continue at a later point in time.

Tip: find out how to optimize audiobooks for roadtrips. Check out Project Gutenberg or these resources for free audiobooks. 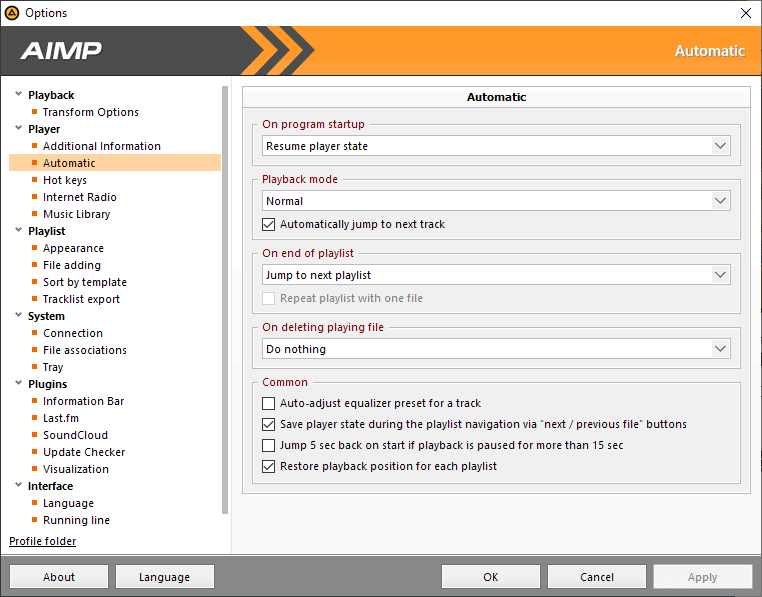 When I did so initially, I noticed that AIMP would not remember the last position of playback so that I had to use trial and error to find the approximate position to continue from the position I stopped playback the last time.

I double-clicked on the audio file whenever I wanted to continue listening to the audiobook and AIMP would play the file from the very beginning each time.

First thing I tried was to find out if there was a setting to make AIMP remember the position of audio files; there was none other than the "resume player state" option under Player > Automatic > On Program Startup in the media player's preferences, and that was configured the right way already.

AIMP should remember the position but it did not. I thought about it for a moment and decided to try to start the player directly from the Start Menu of the operating system. AIMP would start just like it did before but the audio file that I played the last time was listed with the correct position this time.

Means: the player remembers the position only if you start it without loading a file. If you load a file, it won't remember the position even if the audio file was the last file played.

It is a simple thing once you know about it. The instructions may help other AIMP users who face the same issue when they play audio files over multiple sessions using the player.

Now You: do you listen to audiobooks? Which player do you use?

Article Name
How to make sure that AIMP remembers the last playback position
Description
Try the following fixes if the audio player AIMP does not remember the last play position of audio files when you restart the player.
Author
Martin Brinkmann
Publisher
Ghacks Technology News
Logo

Martin Brinkmann is a journalist from Germany who founded Ghacks Technology News Back in 2005. He is passionate about all things tech and knows the Internet and computers like the back of his hand. You can follow Martin on Facebook or Twitter
View all posts by Martin Brinkmann →
Previous Post: « Media Player Classic - Black Edition is a lightweight video player for Windows
Next Post: ShanaEncoder is a versatile video and audio converter »