The new Skype for Web does not work in Firefox or Opera - gHacks Tech News
ghacks.net

I noticed during the preview phase that Microsoft limited access to its own Microsoft Edge web browser and Google Chrome. Attempts to access the preview of Skype for Web were met with "browser not supported" messages and suggestions to either use Edge or Chrome, or to download Skype to the computer to use it that way.

Some thought or hoped that Microsoft would make the new Skype for Web compatible with other browsers. If you visit Skype with browsers not supported officially, you are greeted with the "browser not supported" message for most of them. 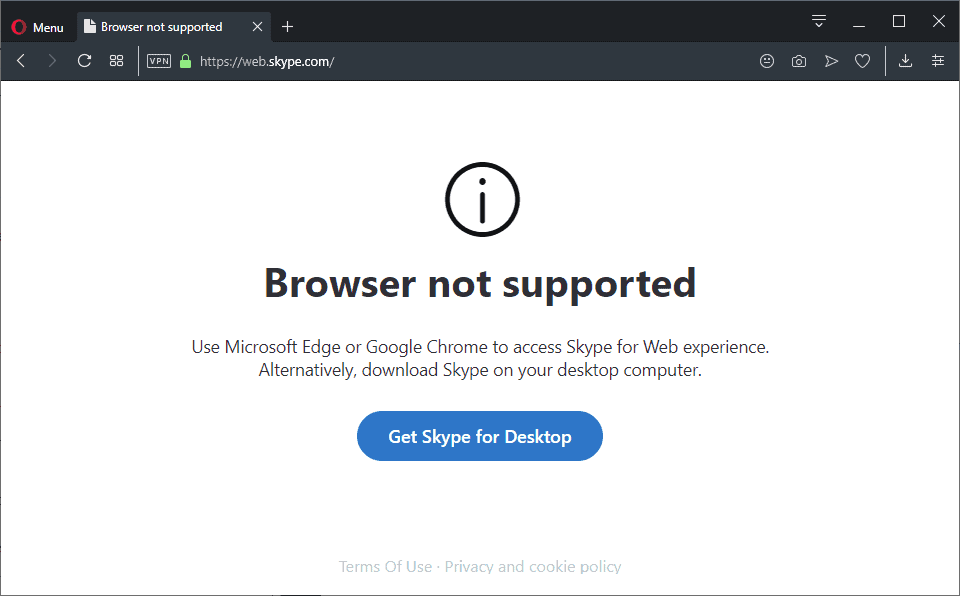 Most? I tried Firefox, Opera, Vivaldi, and Brave on the site next to Google Chrome and Microsoft Edge. Firefox and Opera did not work while Vivaldi and Brave did. It is a bit puzzling that Opera does not work while Vivaldi and Brave do; all three browsers are based on the same code that Google Chrome is based on, and one would assume that this would be enough to ensure compatibility. Something else seems to be going on apparently that blocks Opera (and Firefox) from access.

Microsoft's announcement on the official Skype Blog confirms the browser requirements and that it works on Windows 10 or Mac OS X 10.12 or higher. Linux is not mentioned, nor are other browsers besides Chrome or Edge.

A simple user-agent change is not enough to make Skype for the Web work in unsupported browsers. Microsoft offers no explanation as to why the new web-based version of Skype does not work in Firefox or Opera.

Microsoft released Skype version 8 for Windows desktop yesterday as well which replaces the existing MSI distributable which installed Skype version 7 on desktop PCs. Download links are provided in the article.

With Microsoft moving Edge to a Chromium-base, things are likely only going to get worse instead of better. The Chromium dominance on the Internet will certainly have an impact on Firefox and web compatibility issues that users of the browser and its makers will face.

As for Skype and Microsoft, I think it is a confession of failure if one of the biggest tech companies in the world won't add support for a web browser with a sizeable market share.

Now You: What is your opinion on the development?

Martin Brinkmann is a journalist from Germany who founded Ghacks Technology News Back in 2005. He is passionate about all things tech and knows the Internet and computers like the back of his hand. You can follow Martin on Facebook or Twitter
View all posts by Martin Brinkmann →
Previous Post: « Microsoft Windows Security Updates February 2019 overview
Next Post: Microsoft's data-focused approach to Windows Updates requires an update »