Opera 50 for Android is a major release

Opera Software released Opera 50 for Android on February 19, 2019. The new version of the mobile web browser is a milestone release that introduces new functionality and improves existing features.

Opera 50 for Android introduces support for picture-in-picture viewing, quick scrolling to speed up scrolling on large pages, and more control over the built-in ad-blocker.

The new version of the mobile browser is available on Google Play and will be pushed to all Android devices it is installed on as an update.

Opera users may run a manual check for updates in the Play Store application under My apps & games.

Opera 50 for Android: what is new 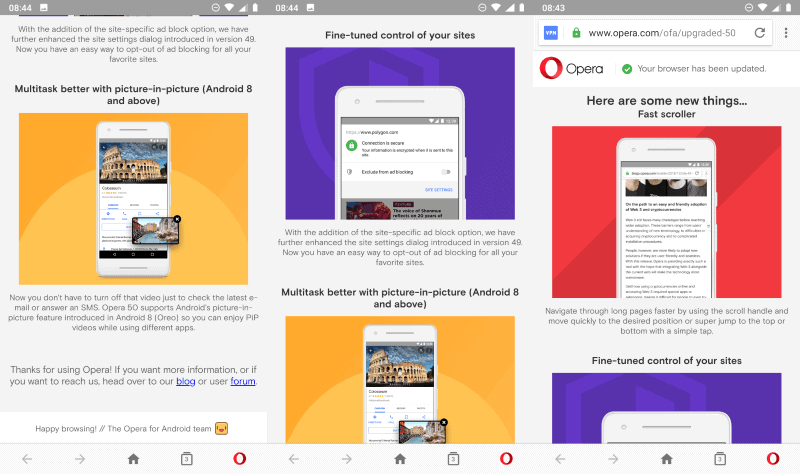 The feature works as you'd expect it to: play videos in a small always-on-top overlay on the screen while you are free to browse to other sites without affecting video playback.

The video continues to play in a smaller window that you may move around on the screen of the device. Double-tap on the video to go back to fullscreen mode or tap on the close icon to stop playback and kill the overlay window. Opera notes that the feature works on all sites that support picture-in-picture mode.

Opera 50 displays a scroll handle on pages when you scroll which you may use to jump to specific parts of the page quickly. It is an extra icon that you may drag up and down to scroll more quickly.

The third feature improves the built-in adblocker. Opera introduced the content blocker in 2016 by integrating it natively in the Opera browser. It was the first major browser to include a native ad-blocker.

It is now possible to disable the ad-blocker on specific sites in Opera for Android. Just tap on the icon next to the site address in the mobile version of Opera and toggle the "exclude from ad blocking" option displayed there to do so.

Designed as a feature to reward publishers users like and would like to see thrive, it is also useful for situations where the ad blocker blocks site content or even access to a specific site.

The new version of Opera is available in three new languages: Estonian, Latvian and Lithuanian.

Now You: Which mobile web browser do you use primarily and why?

Martin Brinkmann is a journalist from Germany who founded Ghacks Technology News Back in 2005. He is passionate about all things tech and knows the Internet and computers like the back of his hand. You can follow Martin on Facebook or Twitter
View all posts by Martin Brinkmann →
Previous Post: « Opera reveals R3 design changes in latest Opera Developer browser
Next Post: PCRADIO Internet Radio app that works with low speed Internet »