Office 2019 will be Windows 10 exclusive

Microsoft revealed that Office 2019, the next version of Microsoft Office, will ship in the second half of 2018 and that previews will be available in the second quarter of 2018.

While that is good news for users and customers waiting to upgrade to the next official release of Microsoft Office, some information revealed today may put a damper on the announcement. 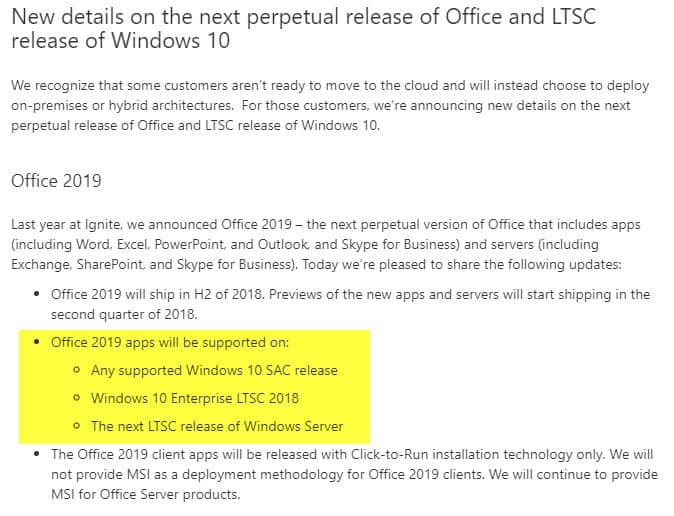 LTSC releases of Windows 10 are released every three years, and they are supported for ten years in total divided between five years of mainstream support and five years of extended support.

The company plans to support Office 2019 for five years of mainstream support and about two years of extended support.

Office 2019 support will end around the same time that Office 2016 ends. It is unclear why Microsoft made the decision; one explanation is that the company plans to move all-in in regards to Office 365 and Office in the cloud and that 2025 may be the year Microsoft might make that switch.

Microsoft did make announcements in regards to Office 365 ProPlus system requirements and Windows 10 Servicing as well.

Windows 10 versions 1607, 1703 and 1709 will receive an additional six month of servicing (from the initial 18 month period) to give Enterprise customers an extension.

This leads to the following end of additional servicing for Enterprise and Education customers:

Microsoft announced changes to the Office 365 ProPlus system requirements on top of that. ProPlus won't be supported on Windows 10 Semi-Annual Channel versions that are no longer being serviced. Starting January 14, 2020, ProPlus won't support Windows 10 LTCS, Windows Server 2016 or older, or Windows 8.1 or older anymore.

The changes that Microsoft announced today are massive. Limiting Office 2019 support to Windows 10, and limiting support for the perpetual version of Office by reducing extended support by three years, affect lots of customers. Even more worrying than that is that Windows 10 LTSC 2018 will be supported until 2028; what happens on those systems from 2025 to 2028 in regards to Office?

Windows 7 is supported until 2020 and Windows 8.1 until 2023. The release of Office 2019 falls into the support phases of both operating systems, but Microsoft decided to make Office 2019 Windows 10 exclusive. It looks a whole lot like "if you don't want to use Windows 10 we will make you" kind of schemes.

Now You: Is Office 2019 the last non-cloud version of Microsoft Office?

Martin Brinkmann is a journalist from Germany who founded Ghacks Technology News Back in 2005. He is passionate about all things tech and knows the Internet and computers like the back of his hand. You can follow Martin on Facebook or Twitter
View all posts by Martin Brinkmann →
Previous Post: « Microsoft Security Updates January 2018 release
Next Post: Microsoft Office February 2018 Patch Day »