A look at Albert Launcher for GNU/Linux

There are many different tools and applications to help enhance speed and productivity in GNU/Linux.

One of the greatest things about the operating system is its flexibility; granted it can sometimes come with a cost of complexity – Thankfully Albert is simple to install and even easier to use!

Albert is a launcher; an application used to easily launch any program, file, location etc; on your machine. With the simple press of a user set hotkey, a small box will pop up on your screen to which you can enter what it is you’re looking for, and launch it quickly.

Why not just use the normal application launcher, or a dock?

Why NOT? Some people love the way Albert and other launchers work, some people prefer more conventional clicking through menus. To each their own, and some people find that a quick button press and entering some text might be faster for them.

Installation of Albert is pretty simple:

Upon running Albert for the first time you will receive a popup box telling you that a hotkey must be setup first, and to press “Ok.” So...Press Ok.

I personally have mine set to “Dark” theme, and NOT centered; I then dragged Albert down to the bottom right corner of my screen, for using during this test run. For my hotkey, I opted to use WIN+ALT+A, for Albert.

Pressing the keys set pops Albert up as expected, and I was able to quickly search for and launch anything I wanted with just a few keystrokes and then pressing the Enter key. I can very easily see how this might increase speed and productivity for many users! 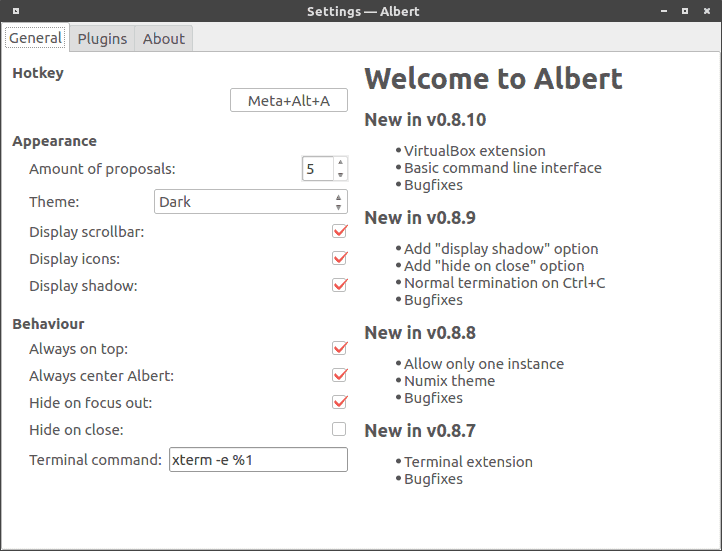 Albert DOES have the edge over most default search functions such as the one I mentioned built into Cinnamon though, because Albert not only can search and run local things, but also on the web, terminal commands, Chrome Bookmarks, even Virtual Box!

Going into the “Plugins” tab of Alberts settings menu will show you the various plugins installed by default, and allow you to configure them further. Google searches, Youtube searches, Amazon, Ebay, even Github can be searched by default!

Using terminal commands is pretty straightforward too, simply preface any command string with ! And Albert will handle it accordingly. An example would be:

! nemo ← this will open the nemo filebrowser

So overall, while somewhat similar functionality exists with pre-existing desktop environment functionality, Albert goes above and beyond, and can really help speed things up.

Now you: Do you use any other productivity enhancing tools or utilities? Let us know in the comments section below!

Previous Post: « A look at Atom text editor for GNU/Linux
Next Post: GNU/Linux for beginners: How Audio Works »