Better late than never. Microsoft is about to release an update to the company's Get Windows 10 application for Windows 7 and Windows 8 devices that includes a decline option.

Microsoft has been criticized heavily for its aggressive push of the Windows 10 operating system. The company's offer looks like a good one on first glance: upgrade your existing version of Windows to Windows 10 for free in the first year.

The main issue that users have with the promotion is not that it exists, but that it won't take no for an answer.

In fact, some of the latest Get Windows 10 prompts that user receive give users no option at all to decline the upgrade. 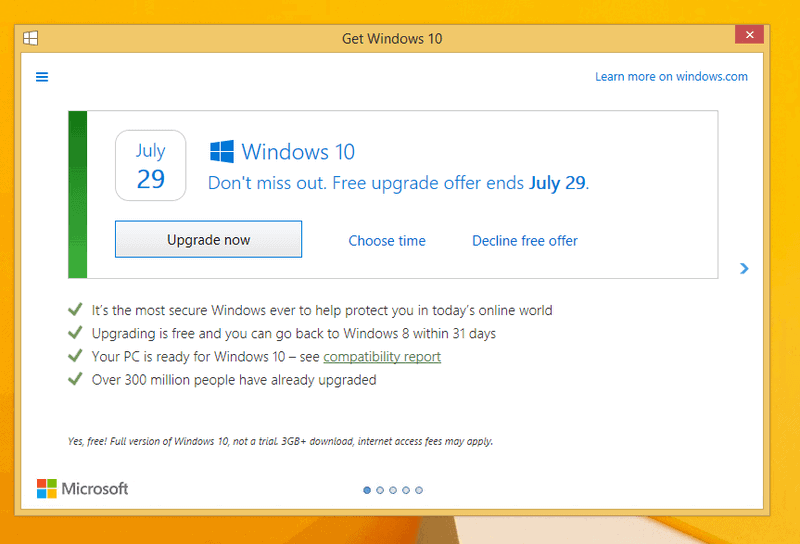 Microsoft changed the prompt regularly, and made it increasingly difficult for users to decline the offer.

The Get Windows 10 application shares characteristics with malware, as it is difficult to get rid of completely.

The Verge reports that Microsoft will launch a new upgrade prompt soon that makes things clearer.

The new Get Windows 10 prompt lists "decline free offer" as one of the options. While the focus is on the upgrade now button in the interface, it is still probably the clearest "no" option of any Get windows 10 prompt up until now.

A "choose time" option is listed as well for users who want to schedule the upgrade to Windows 10 on the device.

The prompt lists July 29 as the last date to get the free upgrade, and it will surely convince some users who have not upgraded yet to take Microsoft up on the offer.

Since the new version of the Get Windows 10 application is not available yet, it is unclear what happens when users select to decline the free offer.

Microsoft could interpret this as "not now" instead of "stop bothering me", which in turn would mean that users would see that prompt or another one at a later point in time

Windows chief Terry Myerson told the Verge that Microsoft has been hard at work at incorporating user feedback, and that the new prompt is the result of that feedback.

One has to wonder why it took Microsoft so long to incorporate this change. Cynics might state that the company pushed the majority of users to Windows 10 already, and that the last month in which the free upgrade is available does not matter that much anymore to the company.

I'd say that the last month is one of the most important ones for Microsoft. Users who declined or blocked the upgrade offer in the beginning might want to take advantage of it after all. The Anniversary Update, which will be out at about the same time as the free upgrade offer expires, introduces important feature additions to Windows 10 that many say should have been there from the beginning.

It is still saver to block the Windows 10 upgrade offer directly, or use a program like Never10 or GWX Control Panel for that instead.

Now You: Will you upgrade your Windows version to Windows 10 before the offer expires?