My Surface Pro 4 Experience so far

I made the decision to buy a Surface Pro 4 shortly after Microsoft revealed the new machine. I always liked the idea behind the machine especially since much of the hardware and the operating system came from a single company which reminded me a lot of Apple devices.

While not all of the hardware comes from Microsoft, the processor is powered by Intel for instance, my hope was that the device would benefit from this.

The main reason why I bought a Surface 4 was that I was going on a trip to Asia in early 2016 and needed a new portable device that would allow me to work from there.

So, my main requirements were that the machine was not too heavy, that the screen was good, that I could attach a keyboard to it that would not slow me down, and that battery life would get me through a day without recharging.

The Surface Pro 4 that I bought

You can select one of the available five default Surface Pro 4 devices on Microsoft's Store, or a custom option that is not available in all countries.

I picked one of the cheaper models, powered by an Intel Core i5 processor (i5-6300U) and 4 Gigabyte of RAM as I had no plans to run taxing applications on the device.

The jump to the 8GB Ram 256 Gigabyte hard drive model cost $300 more at that time. More RAM and storage would have been nice, but since I needed the device only for writing, research, some Netflix watching and light Internet browsing, it was not really something that I needed desperately.

Apart from the device itself, I selected a Surface Pro 4 Type Cover to go along with it which added another $129.99 to the purchase price. 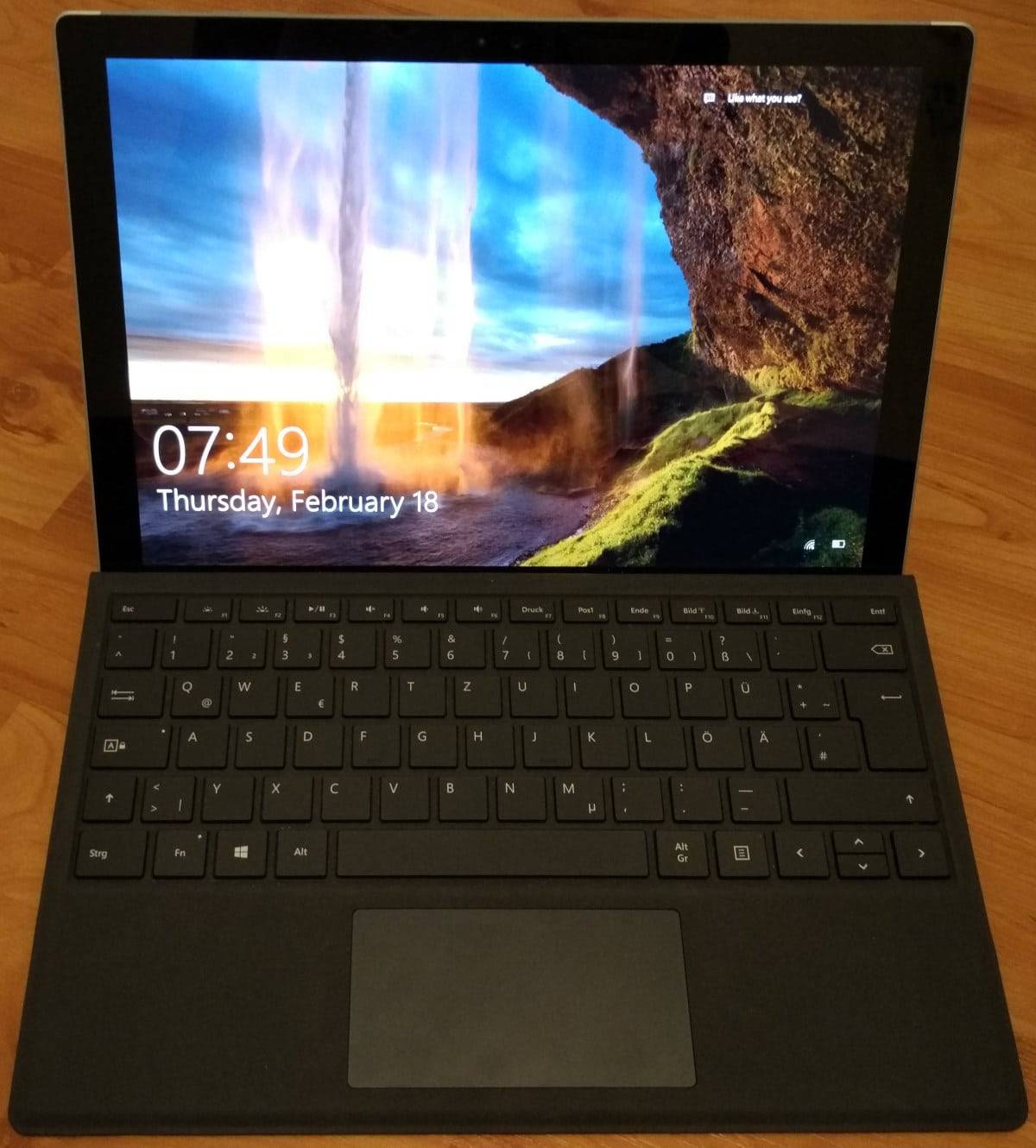 I did not use the device much at home before the planned trip to Asia. What I did though was set it up for the trip which included the following steps:

I used the Surface Pro 4 almost exclusively the last two days before the journey as I wanted to make sure that I had everything that I needed set up correctly on the device.

The Surface Pro 4 is a lightweight device even if you attach a Type Cover 4 to it. While it is probably not the lightest device around there, barely anyone should have troubles lugging it around for a day.

The Type Cover acts as a protective shield if you keep it attached to the device which is quite nice as well as it protects the screen from damage when attached to it.

Battery life is quite good, at least when compared to my previous laptops. With the right power settings, I was able to get a full day's worth of work out of the device without recharging it.

This is however not the case if you happen to watch videos or play games on the device as battery drains quickly in this case.

The device charges quickly, great for a quick recharge at the airport or coffee shop.

The Type Cover 4 is an excellent keyboard for a mobile device. While it is not on-pair with a solid mechanical keyboard that I use on my desktop computer (Das Keyboard review), it worked surprisingly well for the most part.

The layout of the keyboard needs some getting used to time though as keys are not always where you'd expect them. There is no numpad for instance, the arrow keys are beneath the Shift key on the right-side, and the Print, Pos and End keys have been added to the top key row.

The Surface Pro 4 shines when it comes to the display it ships with. It runs at a 2736 x 1824 resolution, and is incredibly crisp and sharp.

Probably the biggest disappointment is the pen that Microsoft ships with the device. I had high hopes for the pen hoping that it would allow me to write on the screen like I would on paper.

The main issue that I have with it is that there is still a noticeable delay when you are using the pen. While I only ran writing tests, I imagine the same is true if you want to use the pen for drawing or other activities.

The experience is simply not there yet, and I rarely use the pen on the device especially since you cannot use it to scroll inside windows.

That's another issue I have with it. While you can use it to scroll using the scrollbar of a window, you cannot use it to scroll inside the window directly. You have to use your finger to do that which works just fine.

Another issue that I ran in occasionally was that the Surface sometimes did not detect the Type Cover during log on. It would launch the on-screen keyboard despite the fact that the Type Cover was connected to the device.

Typing on the keyboard did not work, and I had to use the on-screen keyboard to log on to the system. The keyboard worked again afterwards though which made this a puzzling issue.

Microsoft ships the Surface Pro 4 with only one USB 3.0 port. This may not be a problem for all users, but if you plan to connect multiple USB devices to the Surface, you need to purchase an USB hub to do that.

I could not connect my smartphone, the external hard drive that I bought, a computer mouse, and my photo camera to the Surface 4 Pro at the same time because of it (I did not buy a hub).

I had to disconnect the mouse from the device as well to connect any of the other devices to it.

The price of the Type Cover keyboard is steep. At $130, it costs nearly as much as a professional mechanical keyboard but does not deliver the same value in my opinion. It is still recommended to get a keyboard if you plan to do any writing on the device.

Microsoft improved its Surface line with every iteration, and the Surface Pro 4 is no exception to that rule.

It is a very good device that still has a couple of issues that the company needs to address in future versions, or correct through firmware updates.

Would I buy it again? Yes, I would.

Martin Brinkmann is a journalist from Germany who founded Ghacks Technology News Back in 2005. He is passionate about all things tech and knows the Internet and computers like the back of his hand. You can follow Martin on Facebook or Twitter
View all posts by Martin Brinkmann →
Previous Post: « Find out if your PC is Oculus Rift ready
Next Post: OEM Updaters put PCs at risk »