Find out if your PC is Oculus Rift ready - gHacks Tech News
ghacks.net

Find out if your PC is Oculus Rift ready

Oculus Rift, a VR solution, is now available for preorder for $599 on the official company website (pricing is €699 plus shipping for Euro countries, and £499 Pound).

The VR solution ships with two games and an Xbox One controller instead of the promised Oculus Touch controllers which will be made available at a later point in time.

Virtual Reality is the next big thing, at least if you believe the hype train that has been in full swing for a while and several companies are working on getting their VR products ready for the market.

Preorders are only available for people from select countries (you can switch the country during checkout which reveals the correct price but cannot seem to preorder if you are living in a country not listed by the shop), and it is interesting to note that the price has been revealed today as well.

Included in the bundle are the headset, sensor, Oculus Remote, cables, the Xbox One Controller and the two games EVE: Valkyrie and Lucky's Tale. The estimated shipping data is May 2016, and there is a limit of one order per customer.

Oculus has released a compatibility check program for Windows that interested users can run on their systems to make sure the PC is compatible with the Rift. The program is linked directly from the shop page linked above. 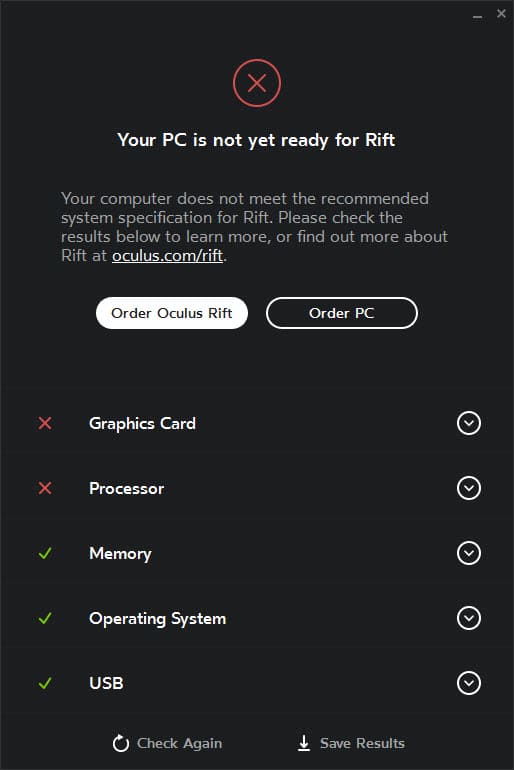 The program checks the PC's graphics card, processor, memory, operating system and USB connectivity, and reports its findings after a short scan.

Here is the recommended specification:

Oculus has a solution for systems that don't meed the requirements: an "order PC" link is provided that opens a page on the Oculus website advertising Oculus-ready PCs.

The three PC systems listed on the PC start at $949 or $999 respectively, and only two of them are currently available while one is listed as "coming soon".

While I would really like to give this a try someday, it seems quite expensive right now for what it offers even if your PC meets the requirements. If your PC does not meet the requirements, you may very well add the same amount to updating it or even more, depending on the age of the machine.

It is unlikely that the Rift will become a mass market product considering its price, at least not in the near future.

As usual, it is a product for enthusiasts who don't mind spending money on cutting edge technology.

Now You: What's your take on the price?

Article Name
Find out if your PC is Oculus Rift ready
Description
The price of the Oculus Rift VR system has been revealed. A compatibility program for Windows is available to test PC compatibility.
Author
Martin Brinkmann
Publisher
Ghacks Technology News
Logo