Some processes on a computer are more important than others, regardless how you are using your computer. This may be foreground applications like web browsers or development environments, resource taxing games or Internet streams, or background processes that need to run all the time.

Windows itself does not offer that many options to deal with issues that may arise from low-priority processes using more resources than they should which in turn may affect core processes. While you can change process priorities for the session, there is not really anything available in the frontend that you can use to make sure the processes that you require the most get the resources they need to work properly.

Process Lasso is a long standing process-tamer that offers a solution to that issue and others. At its core, it makes sure that high priority processes are not slowed down by other processes running on the system. If you dig deeper, you will discover that it gives you full control over how it handles that on your system.

Bitsum, the company behind the product, has just released Process Lasso 8. Reason enough to take another look, considering that our last review of the software dates back to version 4 in 2010. 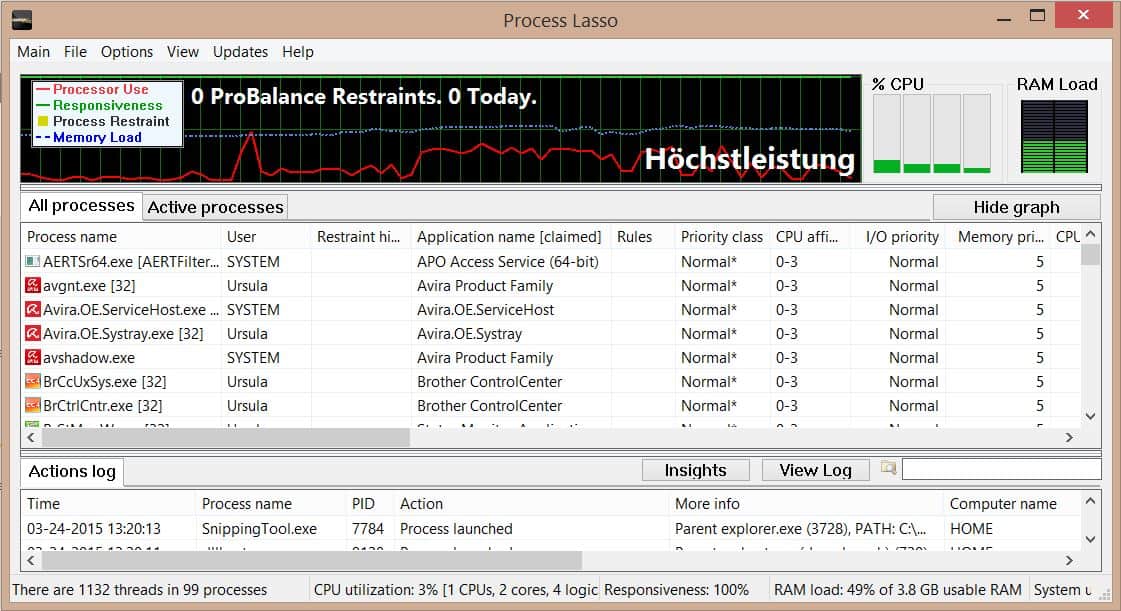 Process Lasso 8 is still offered as a feature-limited free version and a commercial pro version. The free version is not your typical free version though. First of all, some features of Process Lasso Pro are available for a short period of time (between three and fourteen days) after which they are not available anymore. In addition to that, a nag screen is shown on startup and sometimes when you bring the program to the front from the system tray.

As far as changes are concerned, there are quite a few but if you expect new killer features then you will probably be disappointed as there are not any of note.

The improvements on the other hand may be well worth the upgrade. Upgrades are a no-brainer for free users and pro users who purchased a lifetime license as they are free in those cases.

When you start Process Lasso 8 for the first time it displays the list of processes running on your system, information about current and past resource usage, and an actions log at the bottom highlighting among other things when new processes are started or terminated.

Two of the program's core algorithms, Pro Balance and Game Mode, are enabled by default. Pro Balance adjust the priority of processes on the system automatically to make sure it remains responsive even when taxing applications are running.

Game Mode appears limited to Steam by default. It is a new Power Plan that ensures maximum performance by limiting background apps from taking away resources and running at full cpu power.

It is possible to add game processes that are not Steam-related to the program so that they benefit from the adjustments as well.

SmartTrim on the other hand is not enabled by default. It is this mode that received lots of attention in version 8 of Process Lasso. It is a memory optimizer at its core that does not use brute-force to free up RAM on the system. You enable the feature under Options > SmartTrim.

The fourth major feature of interest of Process Lasso is called IdleSaver. It changes the power profile on the fly while the computer is idle. This means that you get full performance while you are working on the computer (or the computer is crunching data in the background), and a power saving mode when the system is idle.

Customization options are probably the biggest strength of the program as it puts you in control if you want to. For instance, while you can enable SmartTrim and be done with it, you could also configure its parameters instead. 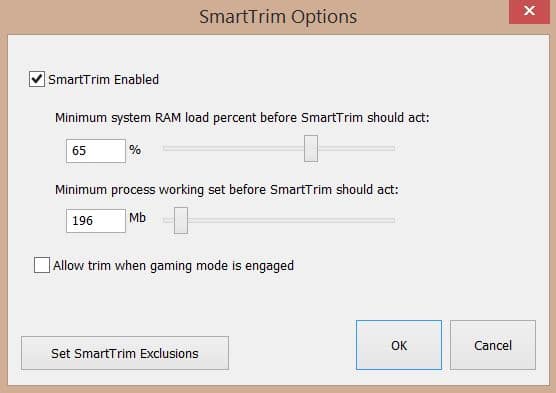 One option provided here is to define the minimum system RAM load and process working set before the feature kicks in. In addition, you may enable it even while in gaming mode and set exclusions so that some processes won't be asked to release working sets when the feature is triggered.

The same is true for the other features. ProBalance ships with lots of options in this regard. Set thresholds, change CPU affinities, ignore foreground processes or make sure system services are excluded by it. 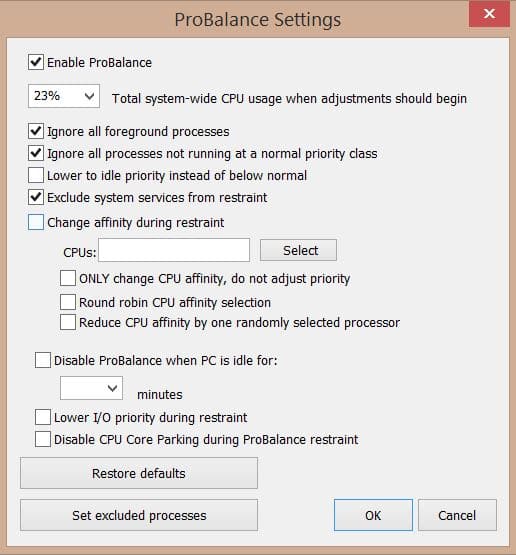 The default options are usually reasonably set but it may pay off to take a closer look and go through all settings manually to make sure everything is set as you want. Exceptions may be important for example, especially if you rely on certain processes and don't want them touched by Process Lasso's automatic adjustments.

Last but not least, Process Lasso allows you to change settings for select processes. Change process priorities, cpu affinities, I/O and memory priorities permanently, or restrict it to one running instance. Another interesting feature is the terminate always option. When enabled for a process, Process Lasso will terminate it whenever that process is running. Useful when you don't want certain processes to run at all on your system.

Process Lasso 8 may not introduce a new major feature but the refinements in it make an excellent program even better. It works well out of the box and if you want, you can install it and forget about it afterwards without having to worry that it will do more harm than good. Its greatest strength on the other hand is that you can be in full control over its features if you want to be.

Process Lasso 9 is a major new release of the application which integrates new features and improves existing functionality next to that.

As far as features are concerned, Process Lasso 9 integrates CPUBalance which has been designed specifically to improve processor responsiveness.

Other features of interest are better interoperability with security software, options to filter the process view to concentrate on the processes that you are interested in, and new Config Profile support.

Process Lasso 9 is available for workstations and servers, as a free and pro version. Interested users may also download beta versions of the application.

Previous Post: « SunsetScreen helps you sleep better by taking the glare of your screen
Next Post: Ninite is a safe place to get Windows software »