The feeling that a computer is slow can have numerous reasons. From running applications or games that the computer's hardware is not capable of running properly, over malicious software that is slowing down the PC to processes that run in high priority or use 100% of the cpu.

A basic example is a process that is running in high or even realtime priority on the system. If that process takes to many cpu cycles or memory then it will be automatically reduced in priority by Process Lasso 4. That does not stop the process from running, but it usually keeps other programs and the computer from slowing down or coming to a complete halt.

Process Lasso 4 has been released today, adding a wealth of new features to the excellent software. Interested users can take a look at all changes at the Process Lasso Development Log. Among the important changes and additions is a new process watchdog feature that restarts, terminates or changes a process affinities if it exceeds a given cpu or virtual memory limit.

Process Lasso has now been better integrated with Vista and Windows 7, offers an optimized core engine and a new process restraint history. 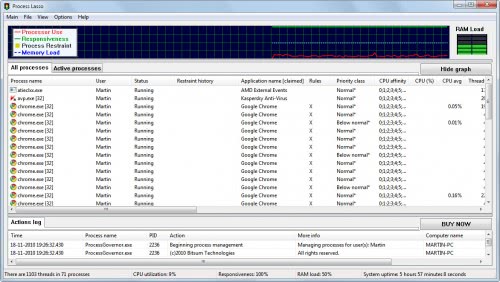 Process Lasso 4 is available as a free version and commercial version. The free version supports the following core features:

A comparison of the free and pro version of Process Lasso is available at the developer website. Some Process Lasso Pro features are available in the free version during the trial period, after which they are turned off.

Process Lasso 4 is available for download for all supported 32-bit and 64-bit editions of the windows operating system.