Detekt, a free tool for Windows to detect surveillance spyware

Detekt is a free tool for computers and devices running Windows operating systems that scans for traces of surveillance spyware on the system.

Designed to provide journalists and human rights activists with a program to detect potential surveillance spyware on computer systems, it can be downloaded and used by anyone running Windows computers.

The program, developed and released by a group of human rights and technology organizations including Amnesty International, the Electronic Frontier Foundation, Digitale Gesellschaft and Privacy International, will alert users if it detects intrusion tools on the PC it is run on.

Update: The original website the program was published on is no longer available. You can download the last version that was released from third-party download portals such as Major Geeks. Please note that Detekt may not detect newer threats due to the lack of updates since 2015.

Detekt is simple to use. It needs to be started with elevated rights, which can be done with a right-click on the program and the selection of run as administrator after download.  The application is compatible with Windows XP SP3 as well and you can run it with a simple double-click on systems running this version of Windows.

The file itself has a size of around 26 Megabytes and the program itself is portable which means that it does not have to be installed before it can be run. The source code of the program is made available as well.

The developers suggest that you cut the Internet connection before you run Detekt on a system and close all open programs as well. This is done to avoid false positives and improve the performance of the scan.

The scan itself takes a while to complete and it is a bit irritating that the window refreshes every five seconds in that time. You can minimize the Detekt window during the scan though to avoid seeing those refreshes all the time. 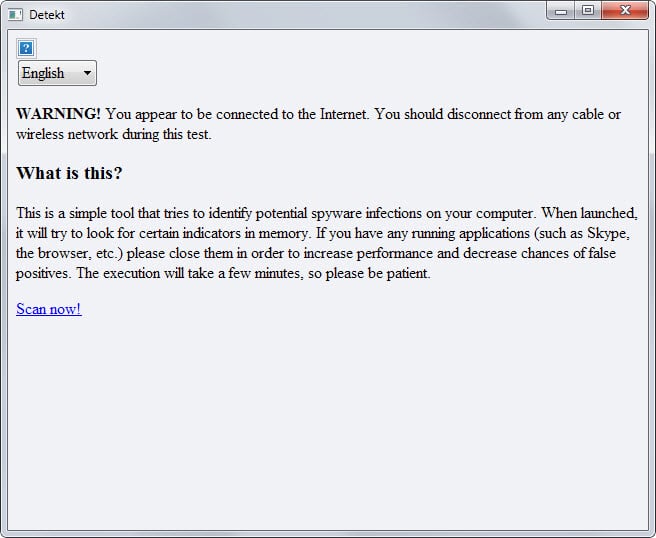 The scan may or may not find spyware on the computer. It needs to be noted that even if it does not find any it does not necessarily mean that there is none.  Spyware may have been designed to avoid detection or specifically Detekt's scanning algorithm.

Scan will highlight potential surveillance software that it discovered during the scan. 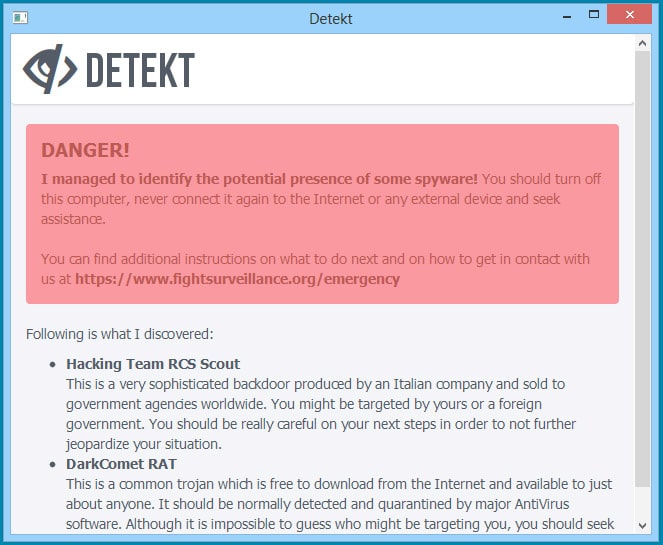 This may include the name the surveillance software is known by and a short description of what it does and who uses it.

The official website offers assistance when it comes to the next step if surveillance software was detected during the scan. The main suggestion is to stop using the computer immediately and cut off its network and Internet connections.  Several email addresses from organizations such as the EFF are provided that may also be able to help.

Detekt is not a surefire way to find surveillance software on a computer system. While that is the case, it can be used as one of the defensive mechanisms that you have in place to protect your computer and data from third-party access.

Martin Brinkmann is a journalist from Germany who founded Ghacks Technology News Back in 2005. He is passionate about all things tech and knows the Internet and computers like the back of his hand. You can follow Martin on Facebook or Twitter
View all posts by Martin Brinkmann →
Previous Post: « First look at CCleaner 5.0's new interface
Next Post: Vintager, a free image manipulation and effects software for Windows »