Windows users have several options when it comes to launching applications or opening files on their system. From placing programs in the system's taskbar, on the desktop or start menu, to using the start menu or browsing to the location on the hard drive manually.

The main idea behind application launchers is to speed up that process. Ideally, all you have to do is enter what you are looking for in the program's interface to load it right from there.

Most launcher apps come with shortcuts that you can press or active to display the frontend on the screen to start issuing your commands.

While most launchers support the basic operations listed above, it is extra features that distinguish them mostly. Some may support web searches for example or to run Windows commands to quickly shutdown the PC.

The following guide looks at the top program launchers for the Windows operating system. Here are the requirements that each launcher has to meet.

Below you find listed information about each program that made the best of list. Here you find a short summary of a program's functionality as well as a screenshot and link to the homepage where you can download it.

After that you find a comparison table that you can use to compare programs in several ways, and last but not least recommendations.

Blaze is an open source keyword launcher that you can use to load programs and files on your system, and to perform web-related activities such as searches.

It uses a plugin-system that extends its functionality. Plugins are available to send emails, make calculations or index music files by their ID3 tags.

You can add and remove directories to index in the settings of the application. For each directory, you can select whether you want its file contents and music file tags to be indexed as well.

This makes Blaze interesting if you want to launch specific songs of your music collection using it. 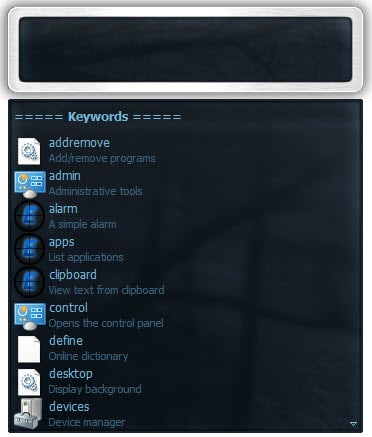 Executor comes as a portable version that you can download and run right away. The free program is very versatile when it comes to the functionality it offers.

It can be used to launch programs and shortcuts, open files or folders, and to load websites or run Internet searches right from its interface.

Its feature set does not end here though, as you find several tools integrated into the application as well. This includes an alarm clock and timer, an option to send emails, or to run select Windows commands such as shutdown or muting the sound.

The program is very responsive and the settings it makes available are massive. From modifying hotkeys to creating your own commands it leaves no wish unfilled.

Famulus does not ship with any commands which means that you need to add your own to launch specific files or folders using it.

Since it does not scan locations such as the start menu, it means that you have to add all the programs and files to it that you want to launch using it.

That's a big nuisance and makes it unusable for you if you want to use it to launch all installed programs on the system. 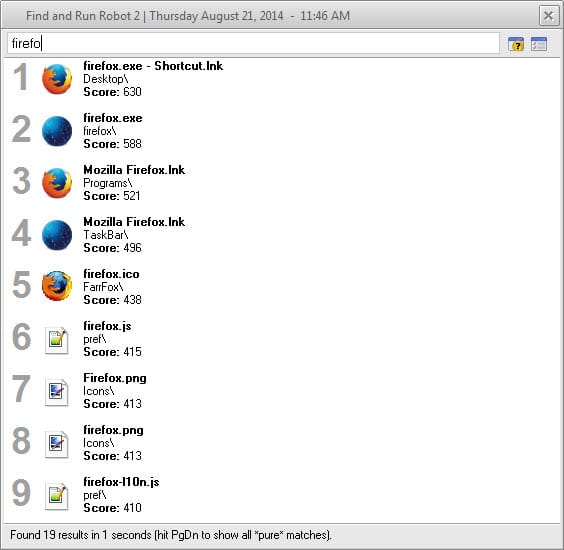 When it comes to customizations, FARR takes the crown. While it works fine out of the box, it is a godsend for users who like to customize programs to their liking.

You can modify nearly every aspect of the program, from basic information such as folders you want included in searches to advanced stuff such as heuristic scores and an impressive range of display related changes.

Find and Run Robot can be used to launch files and programs, to open folders on the system, launch web searches, or Windows tools.

Its plugin system extends the functionality further and there are lots of them. From Gmail and Yahoo Mail plugins over a spelling plugin to plugins that add more search engines to the application.

You can use Key Launch to run executable files stored in default or custom directories, and to perform web searches. The program itself is easy to use and supports the creation of aliases which help you run select programs faster.

You can assign W to Microsoft Word for instance so that you only need to type W and hit enter to start the program.

Launchy is a cross-platform keystroke launcher that is without doubt one of the most popular programs of its kind. It can be used to launch programs and files on the Windows system, perform various Web related tasks such as searches, and run commands and control panel tools.

It needs to index the various locations it supports by default or that you add before they become available. Indexing is fast on the other hand and should not get into the way at all.

The program is very responsive and fast, and supports a plugin system to extend its functionality further. 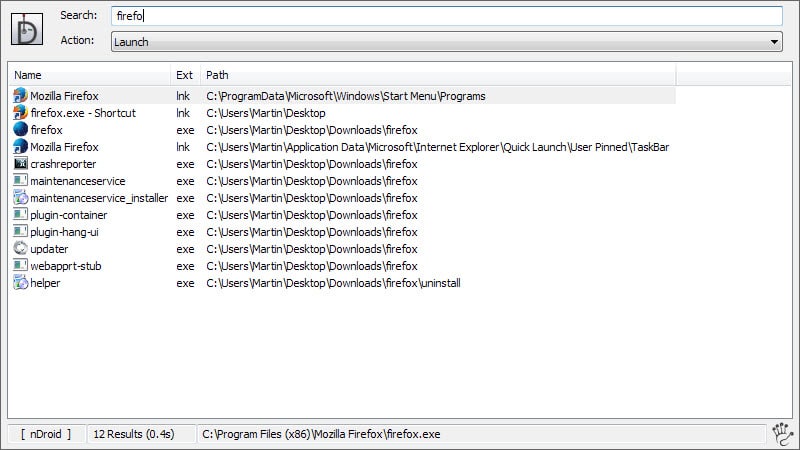 The program is abandoned but works fine on modern systems. It scans select directories such as the Desktop and Start Menu automatically to make available select file extensions to the user when the application is being used.

You can edit the file extensions that you want the program to crawl, and can also block particular files from being indexed at the same time.

The program is rather bare bones part from this though.

The interface of the launcher is as minimalistic as it can get. While some users may dislike that, others may like it because it is compact and still offers all functionality one would expect from an application of its type.

The program can be used to launch programs and perform Web-related operations such as searching on the Internet or opening a website you are interested in.

Most of the functionality is powered by what it calls Magic Words, keywords that run a specific command. The Magic Word dos will launch a command prompt window for instance, while google TEST a search for test on Google.

The program that works really well out of the box is Executor. It supports a wide variety of options in regards to what you can launch using it.

While that is the case, it is Find and Run Robot that gets my seal of approval. It provides the largest amount of customization options in all tested programs without sacrificing speed or memory for it.

While it is not the smallest in terms of memory footprint, its less than 10 Megabyte should not be a problem on most systems.

Now You: Prefer another keyword launcher or use one that is not listed here? Share it with everyone in the comment section below.

Article Name
The best keyword-powered program launchers for Window
Description
Keyword launchers allow you to launch programs fast when you use Windows. Find out which launcher is the best for your needs.
Author
Martin Brinkmann
Advertisement