Computer hard drives and other storage devices will fail eventually. While you may be able to use them for years without any issues, failures can happen from one moment to the next.

If you are not prepared for that, by making sure your data is backed up safely, you may lose access to the data partially or fully.

While backups are one of the best ways to recover from failing hard drives, they are useful for other purposes as well. They are useful if you need to restore files that were accidentally deleted or to gain access to all the data if a computer gets stolen.

Different types of backup tools are available, from Windows' native System Restore or File History feature over single-file or folder backup programs to applications that back up disks or partitions.

This top list looks at the latter kind to provide you with a selection of programs that you can use for that purpose. As always, I start by listing the requirements for inclusion.

Programs may support different backup types, in particular full, incremental and differential. This paragraph explains the differences between those types:

Full: This creates a full backup of the partition. Some programs may copy data one to one while others may copy it sector by sector or as a compressed image.

Incremental: This backup type saves files that have been modified or created since the last incremental backup.

Differential: This type saves the modified or created files since the last full backup.

Both incremental and differential backups are used to save storage space as less data needs to be stored when they are run when compared to full backups.

If you are interested in a feature by feature comparison, scroll down to the table which offers the following information: 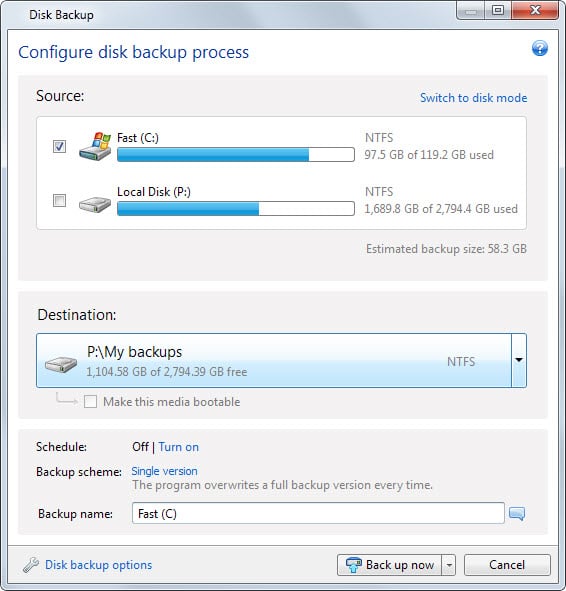 This is a limited version of Acronis True Image, a commercial backup program for $49.99, that is free of charge. The system needs to have at least one Western Digital Drive for the software to function properly. This can be an internal or external drive. You can run jobs on other drives as well though.

While limited in scope, it does not support features such as encrypting the data and only supports full backups, it may be sufficient for users who backup their data only frequently to secure storage space.

It takes only a couple of seconds to select the source and target drive for the backup operation. The program has no issues backing up the primary Windows partition or drive but can only create a single backup that is overwritten each time it is run.

Options are provided to change the compression level of the backup, to enable validation, or to split the data automatically.

The program supports the creation of a bootable disc to run recovery if the computer is not booting properly anymore or blocking recovery in other ways.

Tip: Seagate DiscWizard is an identical version of the program for Maxtor and Seagate drives. 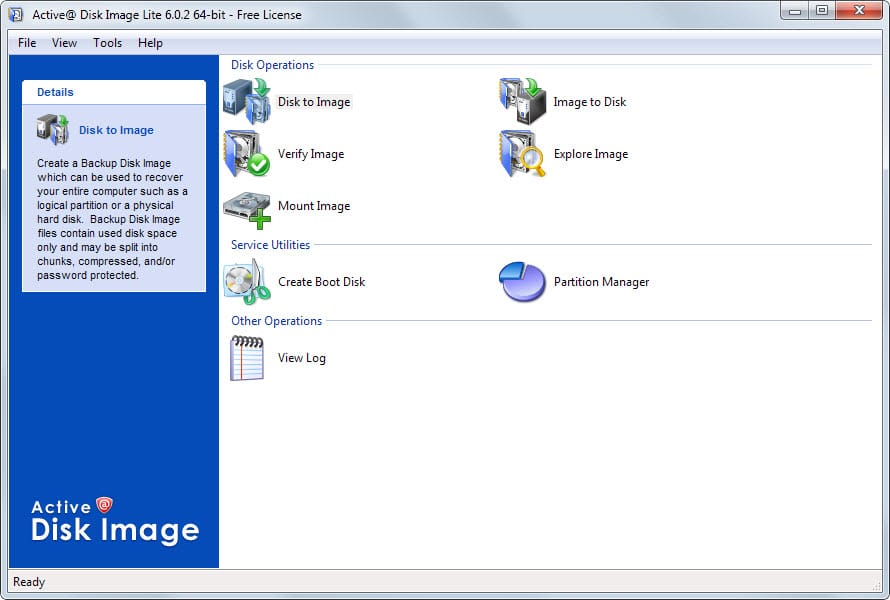 Active Disk Image Lite is a limited version that supports the creation and restoration of partitions and hard disks. While limited in comparison to the commercial versions, it supports several features of interest.

It can create full partition and disk backups, and supports incremental and differential backups as well which means that consecutive backups won't require as much disk space as before.

Backups are automatically compressed to save space, with options to improve the compression level to reduce the size further. Other options include splitting the backup in chunks, creating a bootable disc to run the software on boot without booting into the operating system, and support for all client and server versions of Windows. 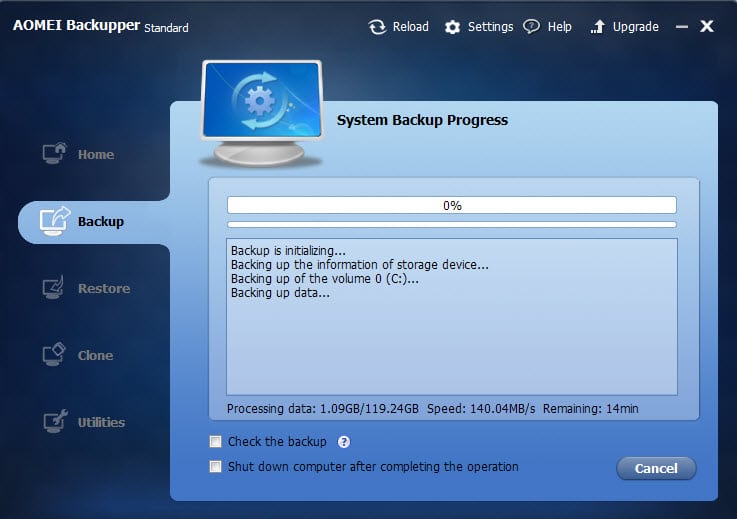 The program supports standard file backups as well as partition and disk backups. After you have selected one of the available backup options, you can open the preferences to configure the backup in detail, for instance by changing compression levels or adding encryption to the backup file, before you start the job.

Backupper supports one-time backups and scheduled backups. Other options that it makes available are to clone a drive, and to create bootable media so that you can load the system using it.

Clonezilla is not offered as a Windows executable but as a file that you need to burn on a CD/DVD or copy to a USB Flash Drive.

You need to boot your PC from CD or USB afterwards which is less comfortable than running the backup directly from within Windows.

In addition to that, it is rather difficult to set up as you need to mount a partition and make selections that many Windows users may not be comfortable with. 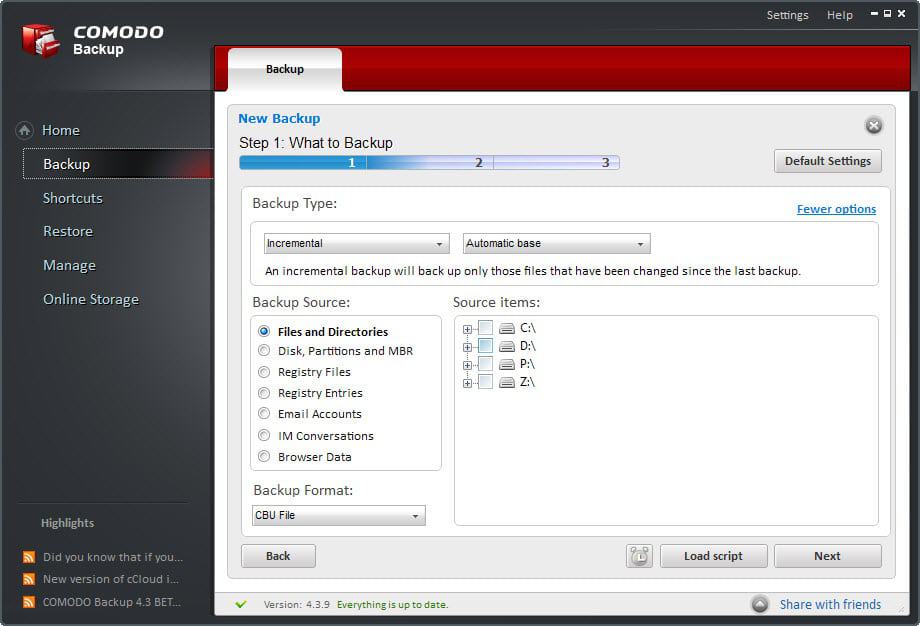 You can opt out of the offer to sign up for Comodo's cloud storage offer, if you don't, it becomes available as an online storage location.

The program requires that you reboot the computer before you can run the first backup job. Here you can select to make a system backup, or run a regular backup which gives you more options in regards to what is being backed up and how.

One interesting feature here is that Comodo provides you with a list of suggested locations to backup. You can select to backup browser data, Registry files or emails for example without having to locate the data folders first on the disk.

Before you start any backup, you may want to change the default save location in the settings. Please also note that you may need to run the program as an administrator for some of its functionality. 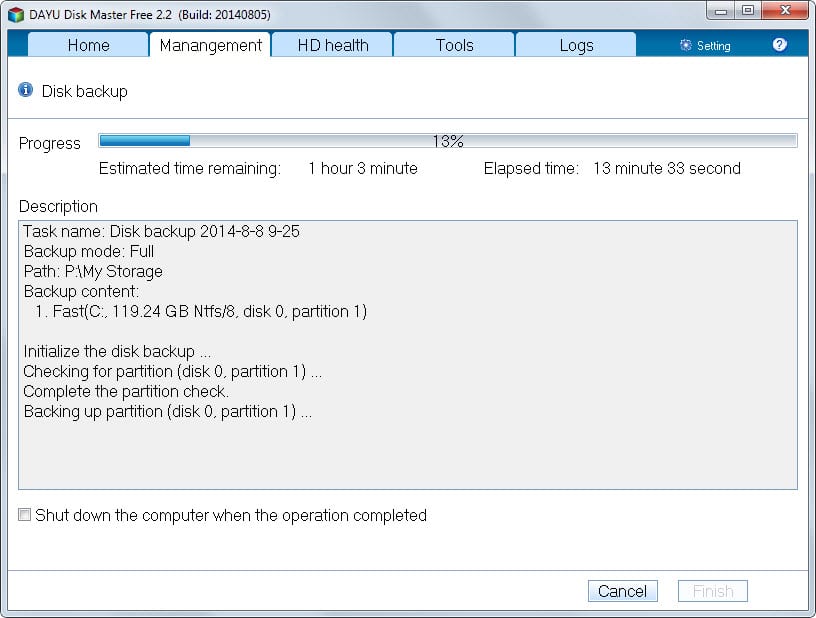 Disk Master Free offers a simple backup program that you can use to create and restore disk images. The program supports full, incremental and differential backups, and offers to create a boot disc on first run which you can use to boot the system from.

The program supports compression, can be used to hot clone a drive, or move a system partition to a new drive. The backup process itself was rather slow though when compared to other programs of the test. DriveImage XML is available as a free for non-commercial use version which you can use to create backups of logical drives and partitions.

Images created this way can be restored to the same drive or another one either directly from within Windows by running the restoration option from inside the tool, or by copying the program to a CD to run it without booting into Windows first.

The program offers several optional features such as browsing backups which can be useful if you need to restore only select files. It lacks options to protect images that it creates with a password though. 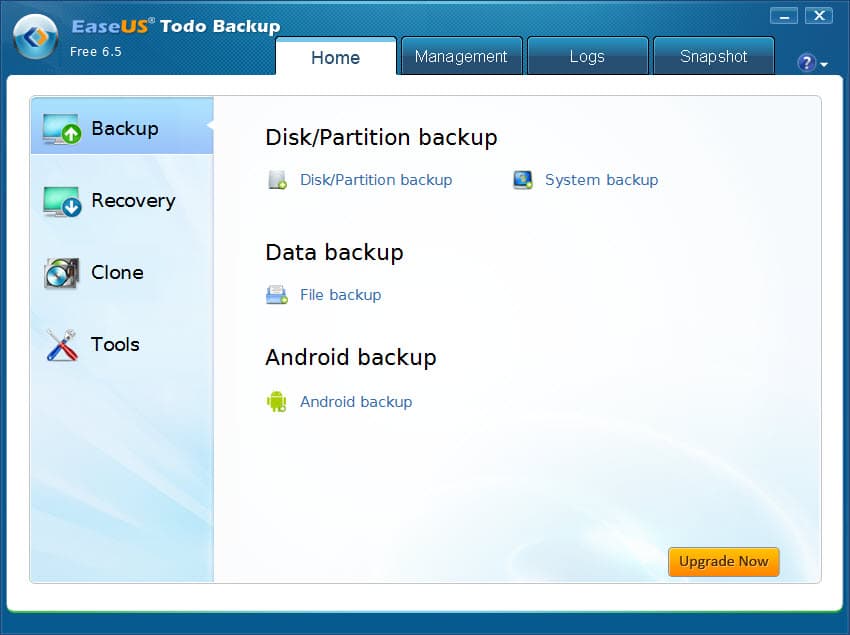 Todo Backup is a popular application which you can use for cloning and creating backups. As far as backups are concerned, you can create file or partition backups and are limited to some of the advanced backup options displayed by the application.

While you can modify some preferences such as the level of compression, there is no option to make use of other features such as password protection or creating differential backups. 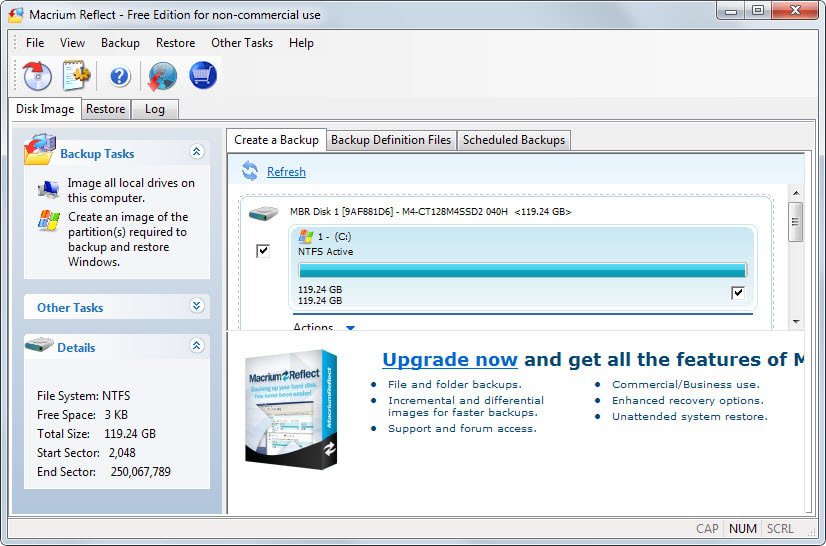 The application supports disk imaging and cloning but lacks advanced features such as incremental backups. Backups can be scheduled on the other hand and it is possible to create a Linux Rescue CD or Windows PE Rescue Media that you can boot from. 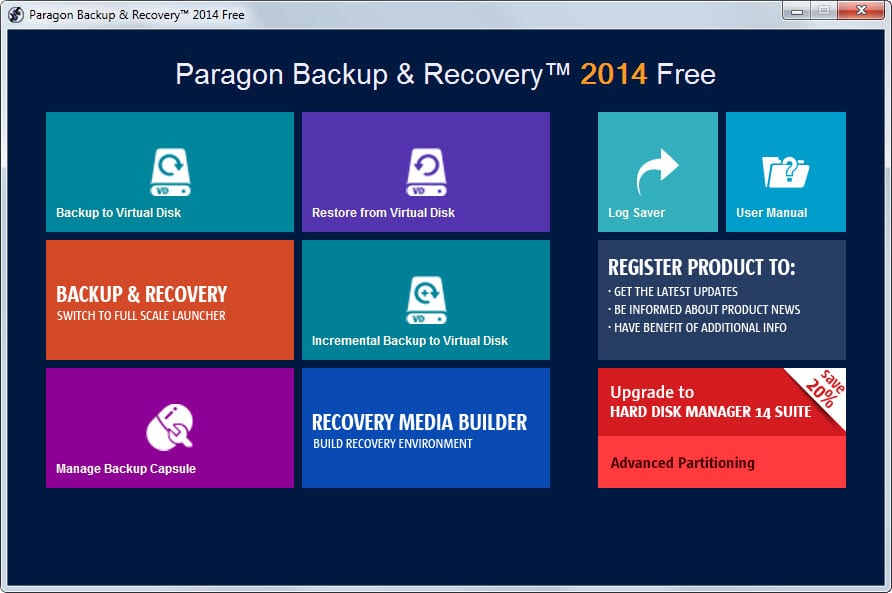 Even though Paragon Backup & Recovery Free is a lite limited version, it has more to offer in terms of options than any of the other free disk imaging programs that we have tested for this top list.

You can use it to create disk images, full, differential and incremental are all supported. Besides saving them in the company's own format, backups can also be saved as virtual disks,

The backup software supports password protection and compression, can verify the integrity of archives, and even ships with partitioning options which can come in handy when you connect a new drive to the computer for the first time.

The program was not able to create a backup of the Windows partition though without a reboot and running the operation prior to the launch of the operating system. 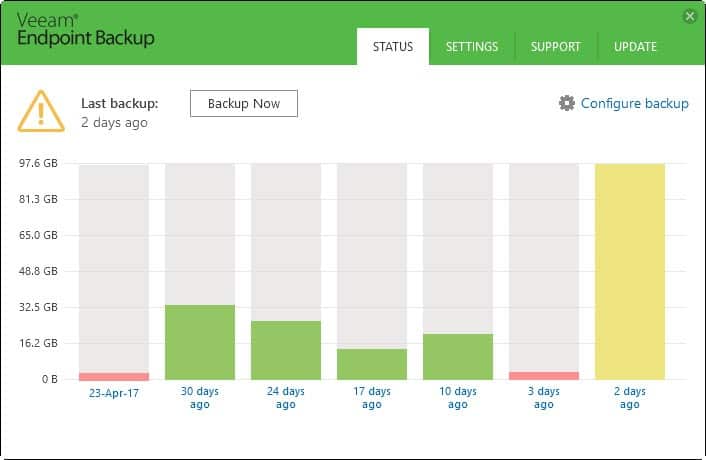 Veeam Agent for Microsoft windows, formerly known as Veeam Endpoint Backup, is a well designed backup software that ships with all major features for Home users.

The program is easy to use, and will do its job automatically on schedule if you configure it to do so. The program supports restoration of the entire system, volumes, or individual file restores.

You can create a recovery medium, and run the backup software using it to restore PCs that don't boot anymore.

Recommendations are based on needs. If you want the program with the smallest backup size, then Acronis True Image may be the logical choice even though it only supports full backups.

As far as features are concerned, the crown is shared by Paragon's Backup & Recovery, AOMEI's Backupper and Comodo's Backup Free as they support features such as encryption or different backup types that not all free imaging solutions support.

Especially support for differential or incremental backups makes a difference here as you won't require as much storage as with a program supporting only full backups.

I use Veeam's solution on my own PCs as I have found them to be very reliable and feature rich.

Article Name
Top Free Drive Backup programs for Windows
Description
The guide looks at the best free backup solutions for Windows that allow you to backup a partition or full drive so that you can restore it at a later point in time.
Author
Martin Brinkmann
Publisher
Ghacks Technology News
Logo