Google Chrome users who are regulars on Google's video hosting platform YouTube have been forced to use the HTML5 player on the website for some time now.

Google provided Chrome users as well as users of other browsers a choice in this regard in the past.

The HTML5 player was opt-in for example which meant that users had to visit the YouTube HTML5 Video Player page to switch from Flash to it if they wanted to use it as the main player on the site.

This option was removed for Chrome users visiting the page, and it has now also been removed for Firefox 33 users who visit it.

What this means is that Google will enforce the use of HTML5 video on YouTube for all Firefox users who use Firefox 33 or newer on their system to do so (Note this means Firefox Nightly currently, but on Tuesday also Firefox Aurora).

Update: Google seems to have delayed the change. Firefox 34 users can switch players right now on the site. 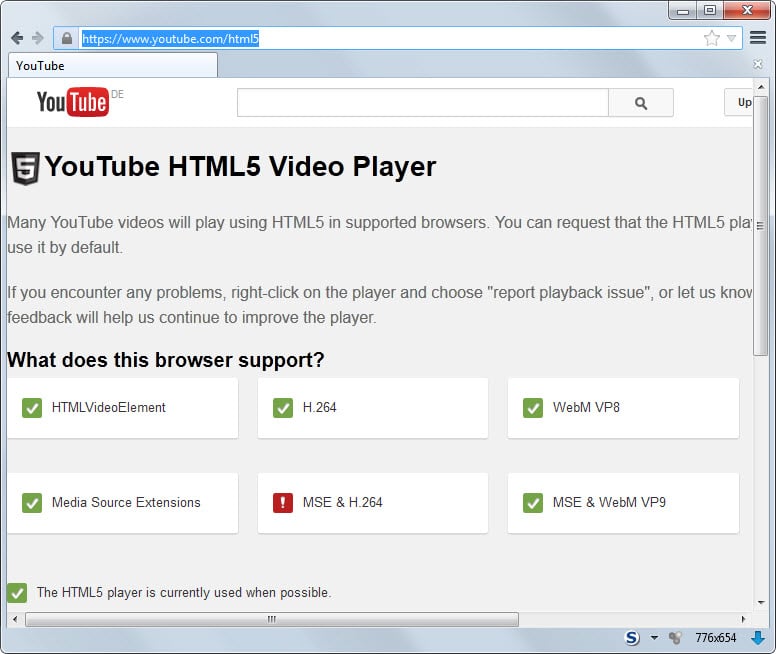 Internet Explorer, Safari or Opera users, and Firefox users who use version 32 or earlier of the browser, are not affected by this yet. They still get the "request the HTML5 player" or "use the default player" button on the HTML5 page on YouTube to switch between Flash video and HTML5 video.

Mozilla did implement support for Media Source Extensions (MSE) and WebM VP9 recently, but the feature is not enabled by default at the time of writing. While it will be enabled in the future, it is necessary to enable it right now in Firefox to make use of it.

If you don't enable the feature, Media Source Extensions is not supported which limits which videos you can play using the HTML5 player.

The main issue for Firefox users is that the browser does not support MSE & H.264 which means that you may run into issues playing some videos on YouTube.

Note: I have no insight into how YouTube handles this. The text "is currently used when possible" suggests that the site will fall back to other playback options, Adobe Flash more or less, when videos cannot be played using HTML5.

So what can you do about it?

If videos play fine on YouTube you do not necessarily have to change anything. If you notice that some videos won't play anymore because of the change, you may want to force YouTube to use the Flash Player instead.

One of the better ways to do so is to fake your user agent so that YouTube detects Firefox 31 when you connect to the site.

You can switch to that user agent using the Tools menu. Press the Alt-key to display it and switch to the new user agent whenever you are visiting YouTube.

You should not run into (many) compatibility issues doing so, and you may want to keep the user agent registered permanently for the time being if you visit YouTube regularly.

The result is that you can select between the HTML5 video player and the Flash Player on YouTube. (via Sören)

Martin Brinkmann is a journalist from Germany who founded Ghacks Technology News Back in 2005. He is passionate about all things tech and knows the Internet and computers like the back of his hand. You can follow Martin on Facebook or Twitter
View all posts by Martin Brinkmann →
Previous Post: « Mozilla plans to release Electrolysis (multi-process architecture) with Firefox 36
Next Post: Firefox, Openh264, Gecko Media Plugins, and current state of development »