Most media players behave exactly the same way regardless of file you load into them. While you may be able to make a couple of adjustments based on the codec needed to play the files, there is no option to make other changes, like modifying the player's process priority based on file format, modifying the color management, or the language of the player interface.

While the latter may not be overly important in most cases, unless you live in a household where multiple languages are spoken and understood, the other options may come in handy at times.

VLC Launcher is a free program for the Windows operating system that provides you with the means to set individual launch parameters for video files that you load in the media player.

Note: The application requires that the Microsoft .Net Framework 4.0 is installed on the system. 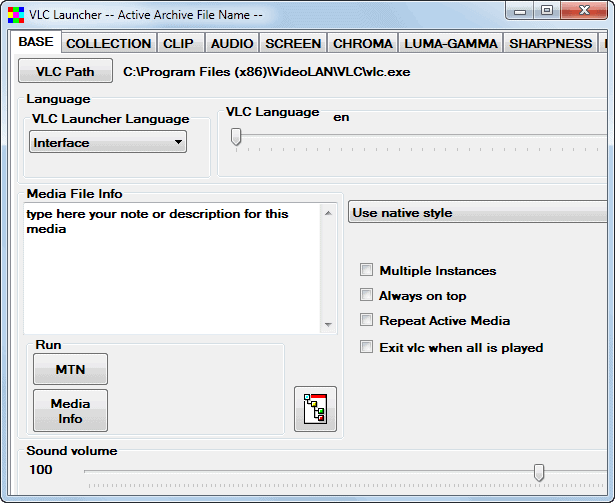 The program may not be the prettiest one on your computer system, but that is not really all that relevant as its functionality makes more than up for that.

It is still a beta product though and it lacks some features that would improve its usability further.

When you first start the application you are presented with a tabbed base program interface. Here you can define the startup parameters for a selected video file.

The Base tab for instance defines several parameters, including the volume of sound, the caching time, the VLC Media Player style, the media file that you want to play, and the process priority of the VLC process that you want to use.

The majority of tabs that remain let you modify certain aspects in greater detail. The screen tab for instance allows you to resize the video, change its aspect and crop ratio, or deinterlace settings.

The collection tab is special, as it enables you to save configurations that you have made in the application so that you can load them at a later time in a heartbeat.

As mentioned earlier, VLC Launcher lacks a couple of features that would improve its usability. It would for instance be very helpful if you could associate video or audio types with certain configurations so that all videos that match the selected file types are automatically using the saved custom configuration.

I may be wrong about some of the missing features, but the lack of a help file and the basic explanations on the project website were not helpful in confirming that.

For now, it is a project to keep an eye on. It appears to be in active development which is a good sign. You may stumble upon smaller features that the developer has packed in the program, like the timer function, the ability to play or stream network files, or options to change HUE and Saturation values before launch.

Now Read: Get more out of VLC Media Player with these tips

Martin Brinkmann is a journalist from Germany who founded Ghacks Technology News Back in 2005. He is passionate about all things tech and knows the Internet and computers like the back of his hand. You can follow Martin on Facebook or Twitter
View all posts by Martin Brinkmann →
Previous Post: « How to set a fixed video volume on YouTube
Next Post: Solayo: create and mix YouTube, Soundcloud and Dailymotion music playlists »