Steam: a switch from offline to online mode does not require a restart anymore - gHacks Tech News
ghacks.net

Steam: a switch from offline to online mode does not require a restart anymore

Most of my PC gaming activities have moved to Steam in the past two or so years. A couple of factors play a role here, like the increasing popularity of the platform that is now used by many game publishers as one distribution source. It may have also something to do with the games that I play and a lack of great titles that I'm interested in.

Dota 2 is for instance a platform exclusive that you cannot play anywhere else. There are other reasons, like the sales that you find on Steam regularly, or that all of my gaming friends use it as well so that we can chat even if we do not game.

Steam supports two different modes, with online mode likely the one that is used by the majority of gamers. Offline basically means that you are not connected to the Steam network while you are playing games. This can be useful if you do not want to use multiplayer or Internet play options, and also prefer not to download and install patches or updates for the game at the time being. Plus, your friends do not see that you are online when you are in offline mode.

It is actually pretty easy to go offline on Steam. Just select Steam > Go Offline to do so. There are however a couple of things you need to make sure of before you do:

The most recent beta changelog highlights that the restarting is soon a thing of the past, at least when you are switching from offline to online mode at login time.

You can join the beta program at any time from within the Steam client. Click on Steam > Settings > Account and there on the change button underneath beta participation. 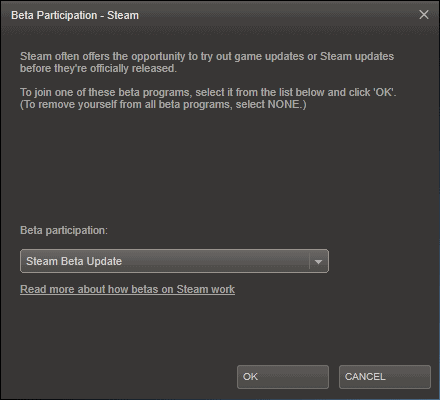 Note that you are asked to restart Steam when you join the beta program or leave it again. You will need to download a new Steam client version when you do so keep this in mind, as it is an 80 Megabyte download.

Previous Post: « Steam: How to protect yourself against phishing and scamming
Next Post: Amiga and Gameloft games coming to Windows Phone and Windows 8 »