Microsoft customers have been looking forward to the release of the Surface Pro, a tablet laptop hybrid designed by Microsoft to provide its users with a full Windows 8 Pro device. While there are other hybrids out there running Windows 8 or Windows 8 Pro, none received as much press as Microsoft's Surface Pro device. Not all of it was positive though. If you look back you will notice that the device's battery life and hard drive space have been the topic of discussion on many blogs and forums on the Internet.

The specs are not too bad on the other hand, at least when you look at the 128 Gigabyte version which, unlike the 64 Gigabyte version, comes with sufficient free storage space to store all your programs and files on it. The three elements that stand out are the device's HD display that displays in a 1920x1080 resolution, USB 3.0 support and the keyboard / cover mechanism that while costing an extra $129 adds the full laptop experience to the device.

Tip: Check out my experience with the Surface Pro 4 device here. Also, how to disable the touchpad on Surface devices.

So, for $999 you get the 128 Gigabyte Surface Pro and since most users want to use a keyboard with the device, it is necessary to add a Touch or Type cover to it. Professional users will certainly want to pick a type cover as it is offering the traditional feel of a computer keyboard, while the touch cover does not. This adds $129.99 to the device for a total of $1128.99.

Surface Pro devices went on sale yesterday online at Microsoft's own store, at local Microsoft Stores and at Best Buy and Staples.

The 128 GB Surface Pro sold out quickly online while the 64 Gigabyte version is still listed as available (but who would want that). As far as retail locations goes, it seems that Microsoft was unable to ship devices in sufficient amounts to those locations. Users reported that many Best Buy and Staples stores did not have a single 128 Gigabyte Surface Pro on sale for the launch, and that shops that did, had only one at their disposal.

Microsoft Stores too did not receive an abundance of devices. While some appear to have received about 30 devices, it was no where near enough to fill demand.

The official announcement post over at the Surface blog is full of comments by disappointed or even angry customers who spend their day trying to get their hands on a device. Many stated that Microsoft did artificially limit supplies to be sold out of devices, but that is just an assumption on their part. What's clear though is that Microsoft was not able to meet up with the demand for the 128 Gigabyte version.

It needs to be noted that being sold out these days does not necessarily mean a device will do well. Remember that the Surface RT also sold out on launch day?

In closing, it is fair to say that Microsoft could have done a better job here. 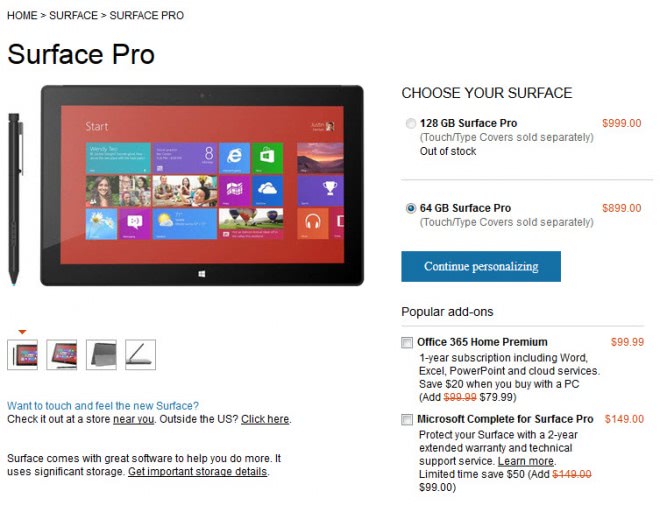 Previous Post: « Surface RT spreads its wings, flies to new markets
Next Post: « All Samsung Windows PCs to be unified under the ATIV brand