I already mentioned yesterday that Microsoft's decision to offer Windows Store only as a program on the Windows 8 operating system and not the Internet a failure. While you will find individual app store pages listed on a Microsoft website if you use the right searches, there is no store front that you can open to search and browse applications listed in store.

MetroStore Scanner offers a solution as it is making available all store apps sorted by change or update date on its website. You can use the service to browse all the apps in Windows Store, and if you want, filter the results by country, category or phrase.

I stumbled upon Great Windows Apps last week as I was preparing the week's best Windows 8 apps article over at Betanews. It is a web service that provides you with information that Microsoft is currently not offering in its store.

The official store rates apps for instance by their average rating. What it fails to do though is take into account the number of votes an app received. An application with one five star vote, the highest possible rating, is placed in front of an app with hundreds of votes but only a 4.8 star rating. Does not really make sense, and that's where Great Windows Apps comes into play. You can visit the website of the service to browse the apps listing there, or, if you are using Windows 8, install the Windows Store app that provides you with the same functionality. 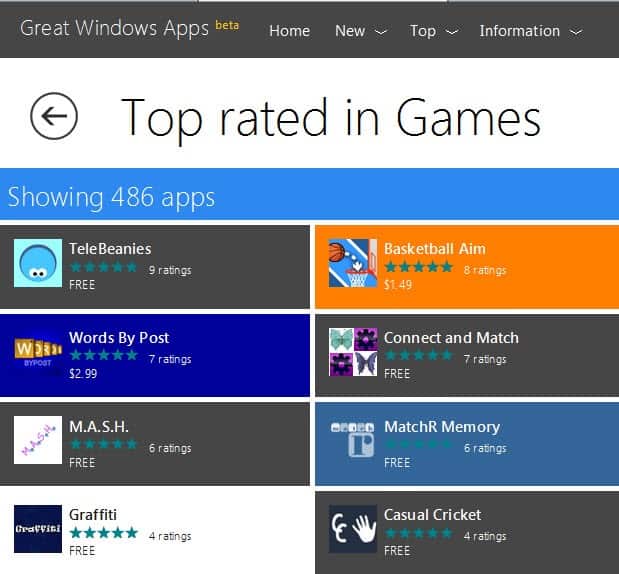 The second option displays top rated apps in each category available in store. This again differs from Microsoft's approach were an app with a single review may be listed before an app with 100. What you also do not see are ratings from other countries. Say you browse the store in the UK and find an application with zero ratings. The US app however, the very same application has been released before and has already twenty or so ratings.

The site combines ratings from various English speaking countries, to be precise the UK, US and Canada to come up with an adverage rating.

Great Windows Apps features a top developer list, something that is also not available in Windows Store. Here you find developers who have created three or more apps and have received consistent high ratings for all of them.

The site features an undiscovered application section as well which lists apps that have not yet received any ratings. It may be interesting to take a peak, but if you are browsing by newest regularly it is likely that you won't find anything of interest in here that you have not discovered before.

The application profile pages on the site display screenshots and descriptions, as well as a link to Microsoft's official store page for the application.

The web service and application improves Microsoft's Windows Store significantly. It is likely that Microsoft will eventually implement some of the features in the store and on the Internet, but until that is the case, this is another great option to browse and discover Windows 8 apps.