Microsoft today has updated the official video and music apps that it ships with the final version of the operating system to include support for the Xbox Music Pass and the feature set it makes available. You need to update the Windows 8 apps first before the new option becomes available. To do just that, open the Windows Store on the operating system's start screen and click on the update notifier on the top right corner of the screen. Here you should see listed the music and video apps. To install updates simply make sure the apps are selected before you click on the install button on the toolbar below.

The Xbox Music application displays a number of additional items on the start screen after the update. This includes the new Smart DJ feature which can create custom playlists for you based on artists or bands that you enter into the search form here. This works pretty much in the same way that Pandora Radio makes available custom radio stations based on an artist or band that you enter on the site. 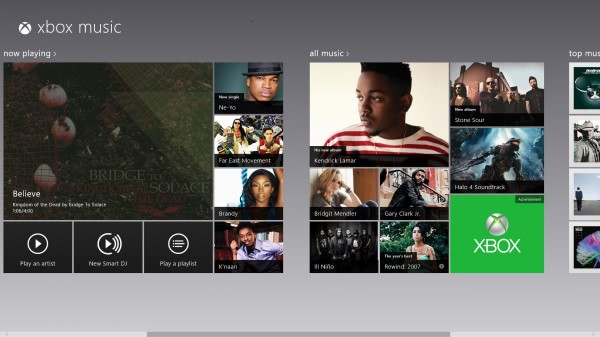 The video and music app feature advertisements for Microsoft's Xbox Music Pass, a new music streaming service that makes available a vast music archive of 30 million songs for about $10 per month or $100 per year. A 30 day free trial is available which will automatically continue to a paid monthly subscription unless canceled before the trial period expires.

The first time I clicked on the advertisement it opened the subscription options right on the Xbox Music dashboard, after that, it would open the Xbox Music web page in Internet Explorer instead.

It is interesting to note in this regard that Microsoft seems to give customers of Windows 8 six months of unlimited music streaming with their purchase of the operating system which will be limited to 10 hours per month after the six month period. The streaming is occasionally interrupted by advertisement but not really that often, at least not during the time I had it play in the background while doing other activities on the operating system.

I was able to find all the artists I tried which is quite remarkable considering that I tried a wide variety from rock, heavy, hardcore, classic music and oldies. The Smart DJ feature sometimes threw an error that it could not create a custom playlist based on the selection. This was for instance the case for Mozart and Bridge to Solace, two of the artists I tried. I was still able to play the top compositions of the artists but could not listen to related artists.

The music app is quite good, even though I'd love on-screen controls for music when not in the music app. I have not yet figured out if there are keyboard shortcuts available that let you skip a song.

How to fix Error 405 | Method not Allowed on ChatGPT

Struggling to understand SEO and its importance? Ask ChatGPT