Radiant Defense is the first Windows 8 Windows Store game that I'm reviewing for Game Saturday. It is a free to play game that restricts some of the available items to gamers who purchase them in game. While it may certainly be beneficial to have those at your disposal, they are not necessary to beat the game.

Radiant Defense is a tower defense game in which you protect your base against invading alien forces. The game has nice visuals and offers enough variety in game play, maps and available towers to keep you entertained.

When you start to play a map, you are usually see a short in-game conversation before the actual game starts. Here you then see the path the aliens take from their start to your base. What's interesting is that you often do get a certain amount of modules which you can use to increase the path they take. Those modules are placed on the map, but only in places where they won't block the aliens from reaching the exit. 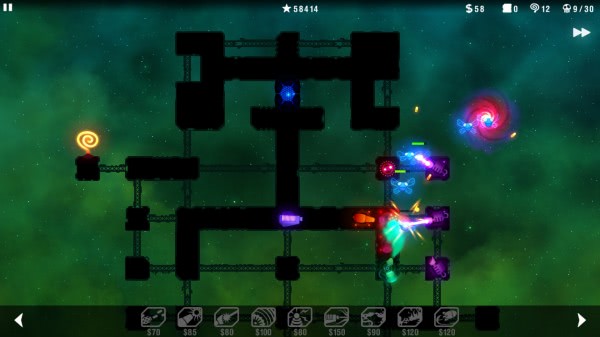 You build towers on those modules, either existing ones or the ones that you add manually to the game. The following towers are at your disposal in the free version of the game:

You can only build the gun turret, cannon and laser at the beginning. To build the other weapons, you need to buy a research lab first. All towers can be upgraded multiple times to increase their range, damage and sometimes even their firing speed.

New maps get unlocked once you manage to finish the previous map of the game. A total of 11 maps are available which should keep you entertained for a while. While you are only facing a couple of waves in the first few maps, the wave count soon reaches the 30 and more in later maps.

Even if you are an experienced tower defense player you may have issues beating some of the maps on first try. You need to try different strategies to beat a map, and it is sometimes difficult to find it. Here are a few tips to get you started:

The game displays the in-game purchase offers to you when you fail a map. It takes a single click to get back to the game though.

Radiant Defense all in all is a nice tower defense game that is hard to beat in later levels. I'm not entirely sure if that is by design, or to sell in-game upgrades.

Please note that the game is also available for Android, iPhone and Windows Phone