If the prospect of running through portals excites you, Telepaint may be just the game that you would like to take for a ride on this rainy Saturday. It is not a Portal-like game, but portals play an essential role in getting from start to finish in each of the levels the game throws at you.

The concept is simply. Your character moves automatically on the map so that you need to be quick more often than not to get things right. There are up to six portals available on each map which you need to sync with each other so that your character can move through them. Syncing works by holding down the assigned keys that you see on the portals.

That's all there is to the game. Sync portals when it is appropriate so that your character can make the way to the exit and avoid the traps that the author of the game has added to later levels of it. 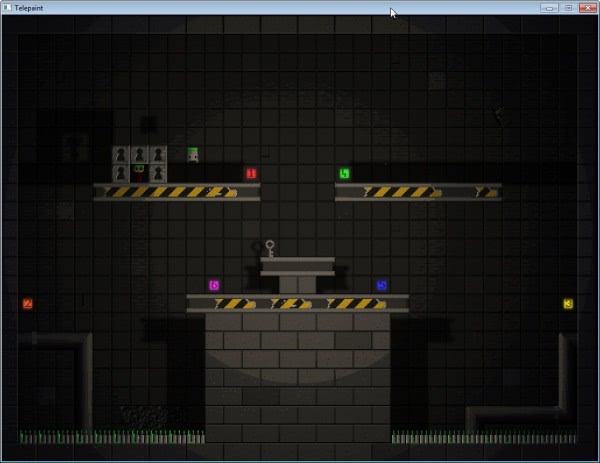 You have unlimited lives so dieing is not a issue in the game other than that you have to restart the level that you have just failed to complete. The game restarts right away which means that you may need to hurry to get it right this time.

A key may be placed in some levels that you first need to reach to unlock locks. The locks may block you from reaching the exit or another part of the map that you need to reach in order to exit the level. Keys may also unlock dangerous areas on the screen.

Telepaint feels a bit like playing the Lemmings game, only that the worker roles that Lemmings provided you with have been replaced with portals.

The limit of six portals may not sound like much, but since you do not have much time because of the ever-moving character of yours, you need to be quick when pressing the 1-6 keys on the keyboard. While you certainly can beat the game playing it with just one hand, I'd suggest you use both of your hands to tap on the number keys more quickly.

Here is a quick video introducing the game

Telepaint is a fun game for a short break. It may not be super long but it is entertaining and that is what counts. You can exit the game at any time and continue at the level that you have stopped playing. There is a config file in the program directory that you can edit to change the level you want to start with. This enables you to skip a level that you can't beat or start anew from an earlier level. Here you can also change the game resolution and whether you want to play it in fullscreen or windowed mode.

Telepaint is a portable game for Windows and Mac that can be downloaded right from the developers website.