Near Field Communication, better known as NFC, is being built into almost every new smartphone today, with the exception of the Apple iPhone. Â It can be a tremendous tool for making payments and handling other tasks like "checking in" on services like FourSquare, but it also scares a lot of users thanks to it's personal security implications (for the lowdown on that you can give a listen to security expert Steve Gibson). Â Beyond the simple security concerns, the service can also be taxing on battery life.

For those using an Android device, the NFC feature can be turned off fairly easily. Â If it's a service you use on a regular basis then you probably won't want to be turning it on and off all the time, although it's a very simple process. Â However, if you don't regularly use NFC then you may just want to keep it disabled for the simple reason of saving a bit of battery life on your Android phone or tablet.

To get started, click on the apps link and scroll to find the "Settings" link. Â Then, tap the "More" option beneath the "Wireless and Networks" section. Â Your steps may vary slightly based on the version of the Android operating system that you are running (the screenshot below was taken from version 4.1.1, Jelly Bean). 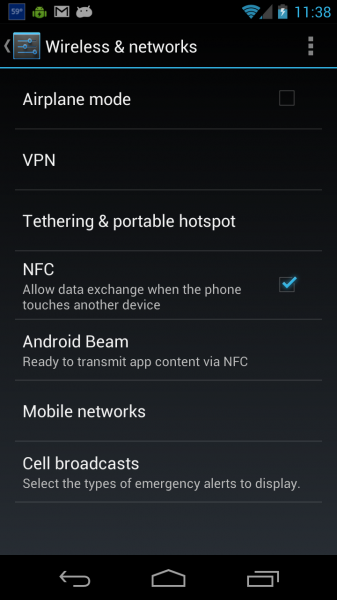 From here you will spot the NFC option, which is enabled by default. Â Tap on the check box to remove the check mark and disable the service. Â You can always re-enable it by reversing this process.

Given the extremely short range of NFC, security concerns over the service are probably overblown, but it does have a very real effect on a device's battery life. Â The latter implication is the one that many of you may want to consider when deciding if you really need it to be running in the background all the time.

Update: Ananya pointed out that the impact of NFC on a phone's battery life may not be as big as one would think it is.It is probably best to test that for yourself to see how it impacts your phone. The security implications on the other hand are still valid.