Australis is the name of the new default Firefox theme that Mozilla has been working on for quite some time. The decision was made to release the update gradually, with some updates already in the browser, while others still waiting to be delivered to it. One of the next Australis-related updates comes in Firefox 19. You may have already seen how the new tab bar will look like in mock-ups that Mozilla designer Stephen Horlander released a while ago.

The new tab strip or style will ship with Firefox 19 if development runs along smoothly. You'll immediately notice the soft curves around the active tab that connect to the tab bar. Mozilla wants to do away with the rectangular shaped tabs that current implementations of Firefox use. 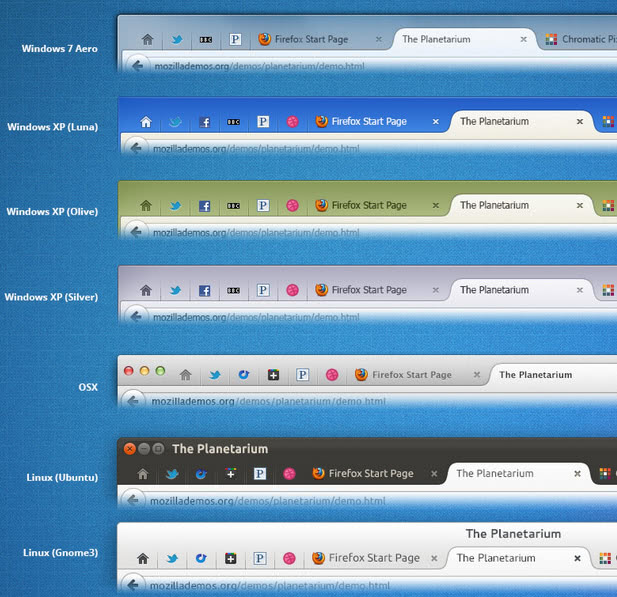 Separators are barely visible on the new tab bar, a big change to how current versions of Firefox separate tabs from each other. Note that not all that is shown on the mock-up above will be implemented in Firefox 19. Only the new tab strip with its curvy active tab and new appearance will.

The core idea behind the change is to move the active tab into the focus of attention by highlighting it and adding the curvy borders to it.

Will the new layout work with tabs on bottom as well? That's one of the questions that I can't find an answer for right now. Mozilla is only showing tabs on top mock-ups, and it seems that we will have to wait until the feature hits the Nightly channel to test this out.

It is also not clear if the change will be mandatory or optional. It is however likely that the new design will be added to the browser automatically, and that users will either have an option to turn it off, or at the very least, install legacy themes that use the old tab bar design.

You can follow development on Mozilla Wiki and this bug listing.

What's your take on the redesign? Something that modernizes the look and feel of the browse, or another change that is not really necessary at all.

Martin Brinkmann is a journalist from Germany who founded Ghacks Technology News Back in 2005. He is passionate about all things tech and knows the Internet and computers like the back of his hand. You can follow Martin on Facebook or Twitter
View all posts by Martin Brinkmann →
Previous Post: « Firefox for Windows gets a web installer
Next Post: Mozilla to notify Firefox users about oudated plugins »