Firefox for Windows gets a web installer

If you want to download Firefox for a supported operating system right now you head over to Mozilla.org, click on the download button there and wait until the 20 or so Megabyte download completes. If the site gets the suggested system and language wrong, you may also need to change it before starting the download.

Mozilla is currently working on a web installer for the Windows version of the Firefox web browser that will be offered in addition to the full offline installer. The main difference here is that users only download a small installer that downloads the required components when it is executed. Firefox can only be installed on the target system if an Internet connection is available.

A web installer offers several advantages over full installers. There are also disadvantages, like the required Internet connection to install the browser, but since full installers won't go away, they can be disregarded. 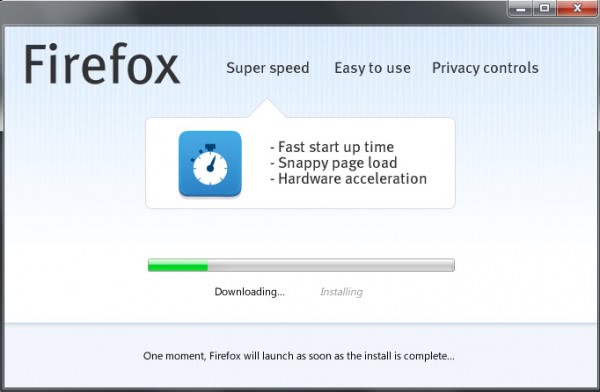 The second benefit is improved support for 64-bit versions of Windows. This only comes into play when Firefox is offered as a 64-bit version next to the 32-bit version. The installer may then pick the appropriate version for the operating system so that users do not have to make that decision.

Mozilla has more control over the download and installation process and hopes that the web installer switch will reduce the number of download failures.

Sample web installers for nightly builds are already available. These versions download the Firefox components via standard http connections right now, something that Mozilla aims to correct before they are made available officially so that all downloads use SSL connections instead.

The Windows operating system is the main target for the web installer, a Mac version is planned for the future. Additional information about the new feature are available on the Mozilla Wiki website. (via SÃ¶ren)