Windows 8 users for some time now can play around with a Metro UI version of the Google Chrome web browser. The version becomes available when users make Google Chrome the default web browser on the system. Mozilla has been working on a Metro UI version of the Firefox browser behind closed doors for the past months, and while progress reports have been published regularly in that time, no one outside a select circle of engineers has been able to test the web browser.

This changes today with the release of a preview build of Firefox for Windows 8's modern user interface. Interested users who already have access to a Windows 8 operating system can download the Firefox Metro UI preview build from the Mozilla Wiki website. It is necessary to make the browser the default browser under Windows 8, something that can be easily down on first start as a prompt is displayed to do just that.

The Metro version of Firefox loads in fullscreen with a user interface that is as limited as possible. In fact, when you are not typing in urls or performing other taks in the UI, you do not see a single toolbar or button on the screen, just the active website. 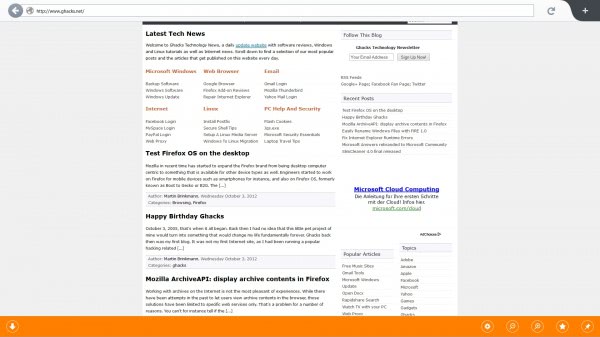 A right-click on the screen opens the top and bottom toolbars that you see on the screenshot above. What you will notice immediately is that scrollbars are not integrated yet into the browser. To scroll you need to use the up and down arrow keys right now as mouse wheel scrolling is not integrated yet either. you can open multiple tabs in the browser which open as thumbnails at the top of the screen. Some core functionality, like find on page or displaying downloads are integrated as well, while other features are not yet. Bookmarks are for instance only displayed on the new tab page, but not in a separate bookmarks menu.

The browser is also not displaying suggestions underneath the address bar when you start typing. What you see instead are suggestions on a blank page based on the browsing history and bookmarks. Options to search for the term on search engines such as Google, Twitter or Bing are also displayed on that page.

The browser is a work in progress, and it looks as if Mozilla won't release a final Firefox version for the modern user interface when Windows 8 launches. Firefox and Google Chrome are limited when they are run on the modern user interface, and there is not really a reason for desktop users to use those browser versions as the regular version is far superior. This may change over time, for now, it may make sense on tablet devices or Windows RT (on which the browsers currently can't be installed on). (via Neowin)

Previous Post: « Test Firefox OS on the desktop
Next Post: « Firefox for Windows gets a web installer