Total Toolbars is a Firefox add-on that extends the browser's options to customize toolbars displayed in its interface.

One of the biggest additions is the ability to control and customize the icons that are displayed in the Firefox status bar, something that is not offered by default in the Firefox web browser.

Several Firefox add-ons utilize the space of the Firefox status bar to display icons, text and information which cannot be moved around by default.

Total Toolbars lets you move these icons around so that the icons and information are displayed in the order that you want them to appear in.

Update: The development of total Toolbar has been discontinued as a response to the release of the Australis launch of the Firefox web browser. The extension is only compatible up to Firefox 27.

Recent versions of Firefox allow you to move icons and information around when you select the customize option in the browser. Just use drag and drop to do so.

Note though that some elements and icons are locked and cannot be moved. As far as the other features are concerned, there is not anything comparable available right now for Firefox. 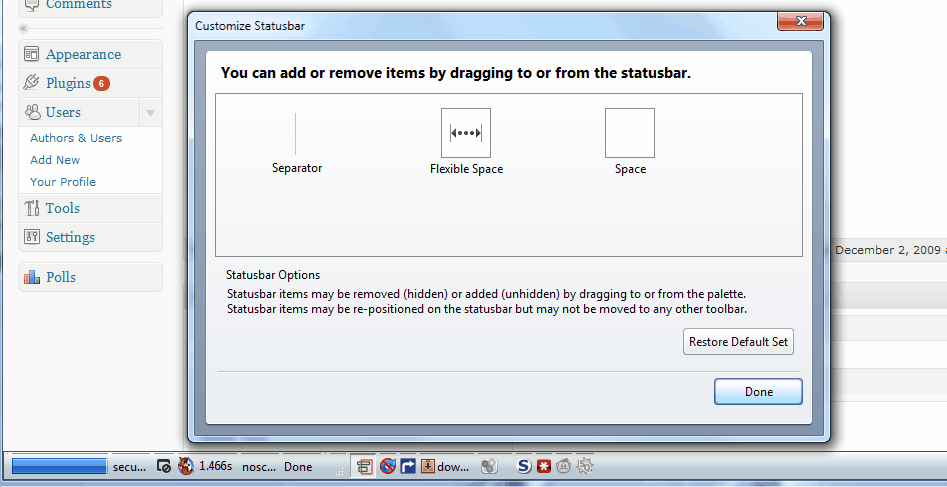 Toolbars can be customized easily by right-clicking on them in the Firefox browser after the installation of the add-on.

It is then possible to move the icons and information around as they become selectable. These customization options on the other hand are only one aspect of Total Toolbars. The add-on will also display a new context menu entry toolbar properties. 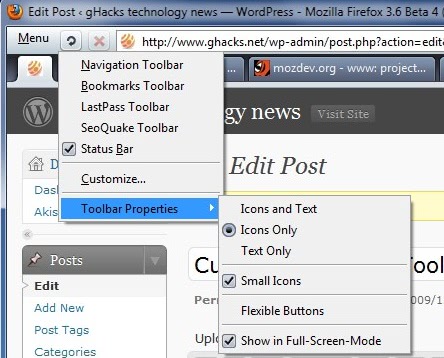 It is then possible to change several display options of each toolbar individually. This includes the view mode (icons, icon and text or only text), if the toolbar should be visible in full screen mode, or if small or flexible icons shall be displayed.

Even more important is the fact that these settings can be changed for each toolbar individually to mix the view modes of the toolbars.

Total Toolbars is available for download at the mozdev website. It is compatible with all Firefox versions up to and including version 27.

The Total Toolbars extension for Firefox added some much needed customization options to the browser's toolbars. Some functionality that the add-on offers has been integrated into Firefox's native customize functionality. That's probably one of the reasons why the add-on has been discontinued by its author.